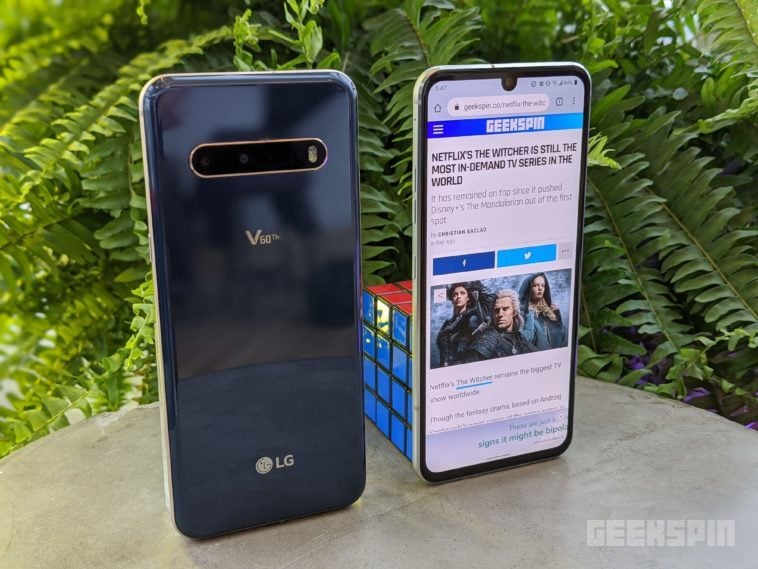 LG has unveiled their V60 ThinQ 5G smartphone and it packs in the company’s largest display yet – a huge 6.8-inch OLED full vision edge-to-edge display. The display also features an in-display fingerprint sensor. Yet, despite the fact that the V60 is packing in a really large display, it doesn’t feel unwieldy to hold. It also feels built extremely well thanks to its new metal and glass combination design.

On the optics front, the LG V60 ThinQ offers solid specs. To that effect, it’s capable of 8K video recording (7,3680 x 4,320 resolution). When it comes to photography, it offers a 64MP rear-facing camera with 2X-10X crop zoom with OIS, and a 13MP Super Wide-angle camera. But specs aren’t everything, so it remains TBD if these specs translate to good real-world performance. There was a time when LG was one of the leaders in the pack when it came to smartphone photography, but they’ve been lagging behind lately and we’d like to see them winning again.

LG has always prioritized audio as much as optics, so it’s not a total surprise that they’ve decided to pack in a total of four separate mics into the V60. In contrast, the V50 packed in just two. The V60 offers a new Voice Bokeh feature that can recognize and separate voices from background sounds, so that your words stand out even in noisy environments. LG is also including a dedicated audio jack and QuadDAC support.

The V60 ThinQ should offer blazing fast performance thanks to the inclusion of Qualcomm’s latest Snapdragon 865 Octacore processor and 8GB of RAM. LG pointed out to us the fact that the V60 ThinQ 5G will be priced close to the same price as the Galaxy S20 basic, but with the V60, you’re getting 5G. Ultimately, the V60 ThinQ offers pretty similar specs to the Galaxy S20 but it should be priced more affordably. The performance to value ratio was the biggest selling point of the V50.

Furthermore, when you purchase an LG V60 ThinQ, a Dual Screen accessory comes with purchase, which absolutely adds to the value and versatility of the device.  The LG V60 ThinQ will come in a choice of “classy white” and “classy blue”. We’re especially smitten by the blue model which looks great with its gold trim accents. The phone will be available from AT&T, T-Mobile, U.S. Cellular and Verizon. We don’t have exact pricing but it’s expected to be priced competitively. Currently, there is no word on whether or not an unlocked version will be available.