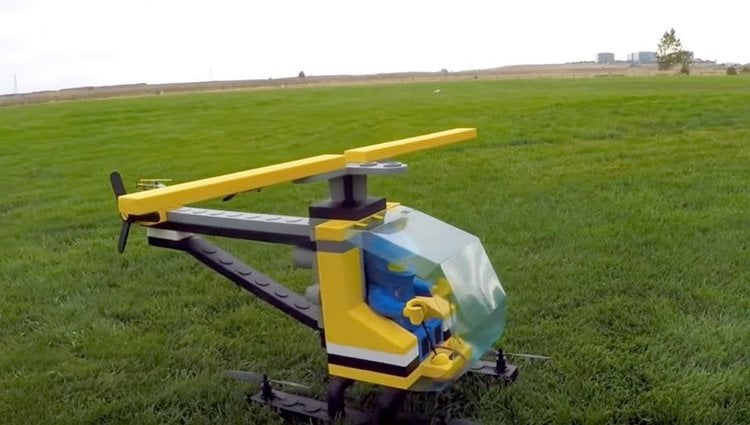 Are you an AFoL? If you don’t know what I’m talking about, you’re probably not. Regardless, odds are you’ll still find this giant LEGO-inspired helicopter rather interesting.

Crafted by Adam Woodworth, a trained engineer whose Youtube page has received millions of views, this latest creation of his is a 10x scale model of LEGO’s famous helicopter featured in the company’s 1990 International Jetport set (6396).

If you can’t tell from the photos, Woodworth’s creation is actually a super lightweight replica made from foam. Why not real LEGO bricks? Well, firstly, LEGO doesn’t make blocks this big, and secondly, if they did, said bricks certainly would be way too heavy to fly – not to mention, blocks aren’t particularly aerodynamic.

Although his creation weights just a touch over 4.5 lbs, if you’re still baffled as to how this thing flies with such a stocky, slow-spinning propeller, you have to take a closer look at its landing skids. Once you do, you’ll notice four inconspicuously placed motors.

Now that you’ve spotted it, I know a few of you are pumping your fists while yelling into the screen, “It’s not a helicopter!” – I know that. Technically speaking, Woodworth’s creation is a LEGO-inspired quadcopter, not a helicopter – but either way, it’s super cool.

Since this is a one-of-a-kind creation, you shouldn’t expect to see any kits or plans floating around. If you want one of your own, you’ll be building it yourself. And If you do decide to take on the challenge, make sure you don’t forget to include your own hand-sculpted miniature pilot.

If you’re looking for something that’s equally as impressive, check out LEGO’s official Harry Potter-themed Hogwarts Castle set. This massive 6000-piece set is the second biggest collection in the company’s catalog, right behind the 7,500 piece Millennium Falcon. The kit comes stocked with over 30 miniature characters including Harry and his pals. In addition, it features iconic locations from the books such as Moaning Myrtle’s bathroom, Dumbledore’s office, and Whomping Willow.