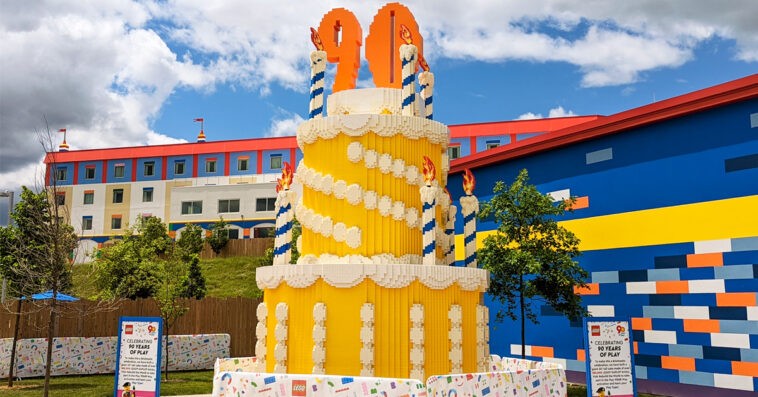 LEGOLAND New York Resort is celebrating this year’s 90th anniversary of the LEGO Group with awesome surprises, exciting prize giveaways, and the arrival of the massive 20-foot-tall LEGO birthday cake.

Starting June 14th, the gigantic LEGO birthday cake made of over 180,000 LEGO elements will be on display in the theme park for photo ops throughout the summer. Watch the video below to get a glimpse of how the 20-foot-tall LEGO birthday cake was built in time for the company’s birthday celebration.

Aside from the LEGO group’s 90th anniversary, this summer also marks the first birthday of LEGOLAND New York, and the theme park is celebrating that milestone by giving away prizes four days per week over the next two months.

“For 90 years, the LEGO Group has inspired creativity and joy among children, and as a theme park, LEGO play is in our DNA,” said LEGOLAND New York Resort Divisional Director Stephanie Johnson in a press release. “This summer, for our first full season, we decided to take the celebrations up a notch with even more surprises and giveaways to pull out all the stops for the first full season of LEGOLAND New York Resort!”

From June 10th to August 19th, all children who visit LEGOLAND New York from Thursdays through Sundays will receive a limited-edition lanyard upon entry to the theme park. Each week, 90 random kids will find a card inside the lanyard with a special surprise.

Select LEGOLAND Parks, including LEGOLAND New York, are also launching the new Play YOUR Way campaign across the globe in honor of the LEGO Group’s 90th anniversary.

Play YOUR Way introduces children to five different play types (designer, maker, explorer, storyteller, or dreamer) and encourages them to get hands-on with various in-Park touchpoints such as playful quizzes so they can discover their play type. “Master Players” or those who have mastered all five play types will journey throughout LEGOLAND Parks in magical costumes to surprise guests.

Fans can purchase single-day tickets (starting at $67.99 for adults) or annual passes ($149 per person) to LEGOLAND New York here. They can also book a vacation package at LEGOLAND Hotel here.