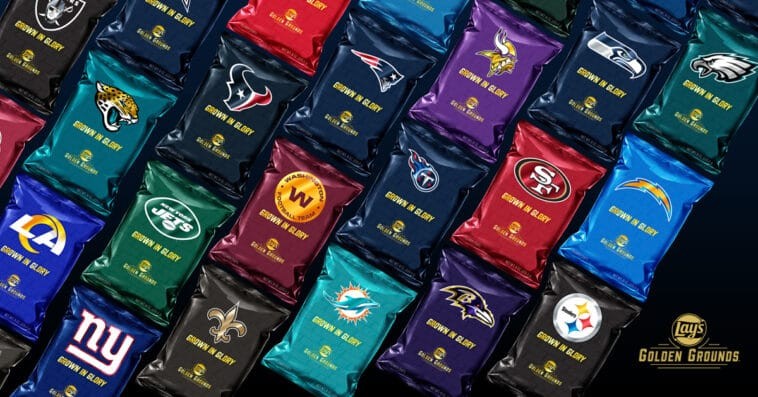 Lay’s is celebrating the football fandom with a first-of-its-kind lineup of NFL-inspired chips called Golden Grounds.

Representing the legacy of 29 beloved NFL teams from across the U.S., Lay’s Golden Grounds chips feature the same classic Lay’s taste that fans have loved for more than 75 years, but are made with a special nod to all NFL teams.

Lay’s took soil from the home grounds of the NFL teams across America, and under the careful watch of its farmers, mixed them into separate parts of an actual potato field to create chips infused with the grounds and the glory of each NFL team. The limited-edition bags also feature keepsake packaging decked out with NFL team colors and logos. To introduce Golden Grounds, Lay’s enlisted the help of Jerry Rice, one of the most legendary NFL players to ever step foot on the field.

Lay’s Golden Grounds won’t be available for purchase at stores, but fans will have the chance to win a bag of these chips for themselves by joining an online sweepstakes until January 25th. To enter the giveaway, fans must simply follow Lay’s Twitter (@LAYS) and look out for special Golden Grounds sweepstakes tweets. From there, fans can respond to the tweets with a video or an image showing love for their favorite NFL team. To qualify for the sweepstakes, fans must include #LaysGoldenGrounds, #Sweepstakes, and the official NFL hashtags of their favorite team to their tweets. According to the sweepstakes’ official rules, a total of 5,800 bags of Lay’s Golden Grounds will be given away.

The launch of Lay’s Golden Grounds chips signals the snack brand’s return to the Super Bowl advertising stage after 17 years.

“Lay’s is all about bringing joy to our fans, and we know there’s nothing that brings a smile to football fans’ faces more than cheering for their favorite team at their home field,” said Stacy Taffet, vice president of marketing, Frito-Lay North America, in a press release. “The limited-edition chips are our way of celebrating fans who stand by their teams through victory, defeat and everything in between. I can’t think of a better way to kick off our journey back to America’s biggest stage with Lay’s return to Super Bowl, where we’ll look to spread even more joy with delicious game-day snacks and an incredible new commercial we’ll unveil soon.”

In addition to an in-game spot from Lay’s at the upcoming Super Bowl LVI, Frito-Lay recently announced a Flamin’ Hot spot that will include both the Doritos and Cheetos brands, as well as other brands who embody the Flamin’ Hot spirit. More information on Frito-Lay’s Super Bowl campaigns will be released in the coming weeks.