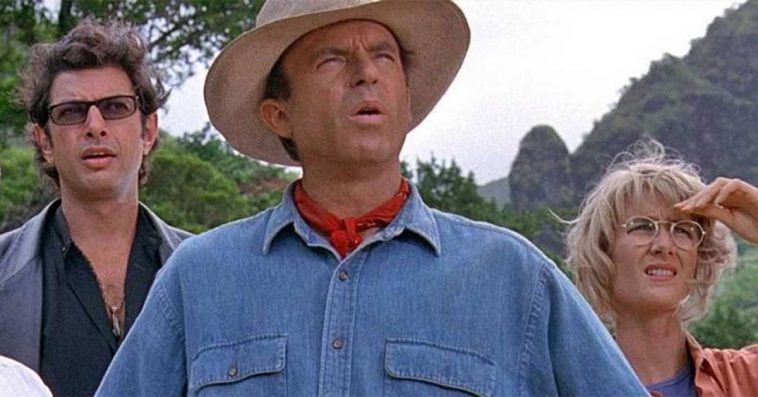 At a Collider-hosted screening of Jurassic World at the ArcLight Cinemas in Hollywood on Tuesday night, Colin Trevorrow — who will be directing the movie — was joined by Dern onstage to announce the return of Neill’s Alan Grant, Goldblum’s Ian Malcolm, and her character Ellie Sattler to the film franchise. Trevorrow revealed that all three actors won’t just be making cameo appearances, but will play major roles in the film.

Though not present at the event, Goldblum took to Instagram to reveal that he’s as “happy as a clam-asaurus” to be reunited with his brilliant co-stars for the third and last installment of the Jurassic World trilogy.

“You did it. You crazy son of a bitch, you did it.” Happy as a clam-asaurus to be reunited with my brilliant costars from the original Jurassic Park @lauradern and @samneilltheprop for the next installment of @jurassicworld…coming soon. 😎🦖🦕🌋

Dern, Neill and Goldblum all originated their roles in the very first Jurassic Park movie in 1993. Dern and Neill returned for the 2001 sequel Jurassic Park III, while Goldblum reprised his character in 1997’s The Lost World: Jurassic Park, and again in 2018’s Jurassic World: Fallen Kingdom. Jurassic World 3 will be the first movie the trio will all appear together since the original Jurassic Park film.

Trevorrow will direct Jurassic World 3 from a screenplay he co-wrote with Pacific Rim Uprising scribe Emily Carmichael. The pair worked off a story by Derek Connolly and Trevorrow, who together co-wrote 2015’s Jurassic World and Jurassic World: Fallen Kingdom. Trevorrow will also executive produce the movie with Steven Spielberg, while Frank Marshall and Pat Crowley will produce.

Plot details about Jurassic World 3 are being kept under wraps, but the last installment of the trilogy ended with a dinosaur auction that went horribly wrong when dinosaurs kept in the mansion found their way off the island and into civilization, If the upcoming sequel is set right after the events of the most recent movie, it’s likely that the next film will deal with the consequences of this terrible incident

Trevorrow has briefly explored this new Jurassic Age in his new short film called Battle at Big Rock. Also screened at the Collider Screening Series last Tuesday, the short is set one year after the events of Jurassic World: Fallen Kingdom, and shows one family’s attempt to deal with the dangerous new world.

Jurassic World 3, which will also see the return of Chris Pratt’s Owen Grady and Bryce Dallas Howard’s Claire Dearing, is set to be released on June 11th, 2021.