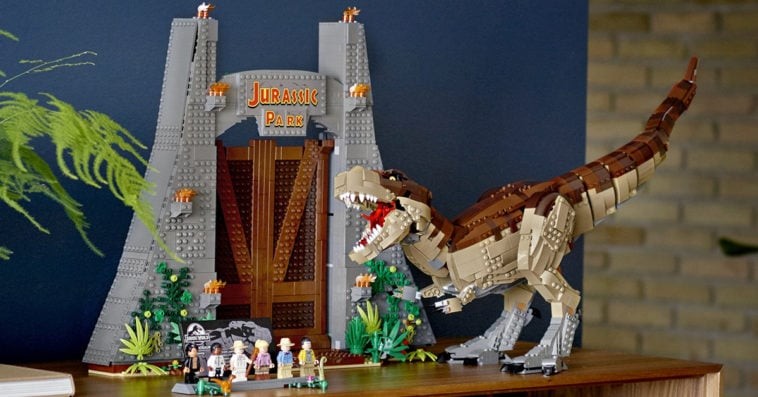 The original Jurassic Park film turns 26 today, and to mark this special occasion, LEGO has unveiled a nostalgic building set that fans of the sci-fi adventure franchise will truly love.

Measuring over 16 inches high, 18 inches wide, and 5 inches deep, the brick-built Jurassic Park gate has an opening function and is decorated with jungle leaves and flame elements in the front.

The backside of the gate’s wall framing features a buildable dinosaur nest with 2 cracked egg elements at the top, and other brick-built scenes inspired by the 1993 movie, including a bunker with a buildable bed for Ian Malcolm, a power shed for Ellie Sattler; a dining room with a table and a minifigure chair for John Hammond, a control room with a buildable desk for Ray Arnold, and a buildable mud slide and a shaving cream can for Dennis Nedry.

With a total of 3120 building bricks, this construction set is perfect for advanced builders who are looking for some challenging playsets to assemble. Click the gallery above to have a closer look at the building set.

The LEGO Jurassic World Jurassic Park: T. rex Rampage set will be available directly from LEGO Stores and shop.LEGO.com from July 1st for $249.99. But LEGO VIP members can get it as early as June 19th.