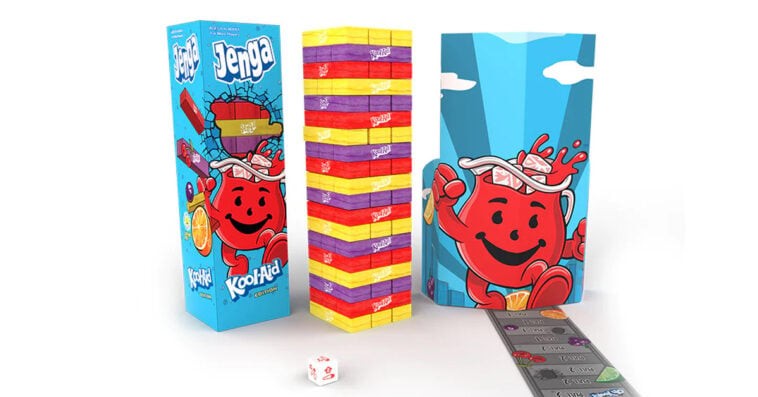 The latest version of Jenga is out, and it’s inspired by the flavored drink mix brand Kool-Aid.

What is Jenga: Kool-Aid?

Created by game developer The Op, Jenga: Kool-Aid is the newest way to enjoy your favorite childhood drink mix. A great addition to your growing family game collection and the perfect gift for Jenga and Kool-Aid fans this holiday season, this thirst-quenching game is sure to serve up a refreshing pitcher of nostalgia at your next game night.

This intense edition of the classic block-stacking game takes things to a whole new level because players won’t be simply pulling and stacking blocks as players would do in a normal Jenga game. This version comes with a custom Kool-Aid die, and players will have to roll it out to determine which of the Cherry, Lemon, and Grape colored blocks they must remove and replace from the tower. Read the official description of the game below:

“Thirsty for a new way to enjoy your favorite childhood drink mix? JENGA: Kool-Aid serves up fun and nostalgia in this intense version of the classic block-stacking game! Remove and replace Cherry, Lemon, and Grape colored blocks based on the roll of a die to build up extreme heights of flavor—but make way for Kool-Aid Man! The iconic smiling pitcher inches closer to breaking through your rewarding tower with every move. OH YEAH!”

Where to buy Jenga: Kool-Aid

Priced at $24.99, the game is now available online at The Op’s official website. It will also be sold on Amazon soon. The classic block-stacking game with a twist, courtesy of your favorite childhood drink mix Kool-Aid

Where was Jenga invented?

Published in 1983, the game was invented by Leslie Scott, the co-founder of Oxford Games Ltd, based on a game that evolved within her family in the early 1970s using children’s wooden building blocks they bought from a sawmill in Takoradi, Ghana. The name Jenga is derived from kujenga, a Swahili word that means “to build.”

The game is now owned by Pokonobe Associates, with Hasbro being a licensee of the brand in most countries around the world. By 2019, over 80 million units of the game, equivalent to more than 4.3 billion blocks, had been sold worldwide. In 2020, the game was inducted into the National Toy Hall of Fame.

Aside from Jenga: Kool-Aid, the game has several other official versions, including Hello Kitty, Super Mario, Harry Potter, The Walking Dead, and Fortnite, just to name a few.

Where was Kool-Aid invented?

Kool-Aid was invented by Edwin Perkins in 1927 in Hastings, Nebraska, specifically in his mother’s kitchen. With an objective to reduce shipping costs of the liquid concentrate called Fruit Smack, Perkins discovered a way to remove the liquid from Fruit Smack, leaving only a powder.

Perkins moved his production to Chicago in 1931 and Kool-Aid was sold to General Foods in 1953. Now owned by Kraft Heinz, Kool-Aid is available in various flavors, but the original six are Cherry, Grape, Lemon-Lime, Orange, Raspberry, and Strawberry.