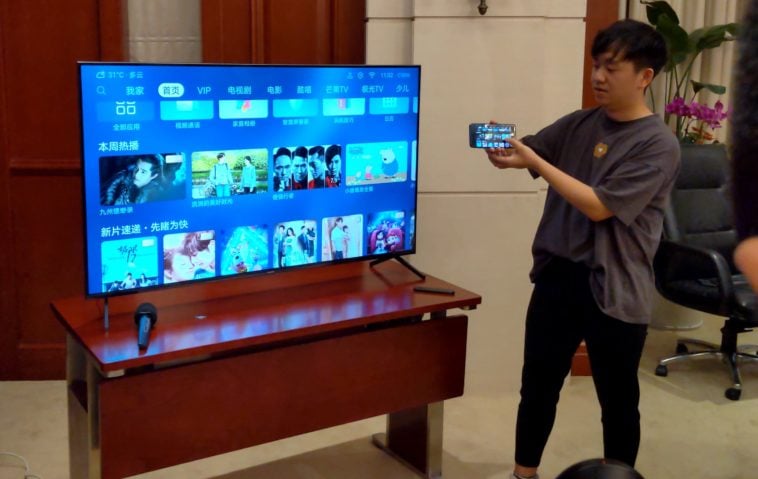 Rumors have been circulating for a while now that OnePlus and Apple are working on a Smart TV, yet Honor just beat them both to the punch with their new Honor Vision TV. The Honor Vision is the first smart display / smart TV to come powered by Huawei’s new Honghu Chipset and it’s also the first device to come running Huawei’s new HarmonyOS that was announced last week.

The 55-inch Honor Vision has been designed with super-thin bezels and a rear panel that rocks a neat diamond shape. To add to the wow factor, the front panel features a moving color “breathing light” that rotates through Honor’s signature colors. The display itself offers a 4K UHD ultra-wide color gamut. It’s powered by a Quad-Core CPU and a Quad-Core GPU, along with Ultrafast Wifi. On the audio front, it packs in a total of six 10 watt speakers.

When it comes to software, running on the HarmonyOS, the Honor Vision is designed to be both a home entertainment center and a smart home hub. But there’s one trick that the Honor Vision offers that is much more to difficult come by on other smart TVs, and that is video calling. To that effect, the display has a built-in pop-up camera that is able to record 1080p HDR video. Video calls can be made with multi-screen seamless switching. The demo we saw showed off a smooth and very clear video calling experience when the TV connected to someone calling from a smartphone connected to a cellular connection.

Another somewhat unusual but useful feature is the Honor Vision’s Family Note Function which allows you to send messages from your phone directly to the smart display. The message will pop up on the Honor Vision so that family at home can see your message. That certainly eliminates the excuse that they didn’t see your message because they were too busy watching TV.

You can also use your phone to control the TV using your smartphone. And thanks to the TV’s low latency wifi, all you have to do is tap the phone on the included NFC tag and you’ll get instant screen mirroring. In addition, the TV connects to your smart home ecosystem so that you can easily control all your connected smart home devices.

Our first impressions of the Honor Vision is that it looks extremely promising… if you’re someone who can take advantage of it and the Chinese-focused HarmonyOS. Because otherwise, it’s extremely unlikely that the Honor Vision will make its way to the U.S. anytime soon – not unless Honor decides to partner with a different smart TV OS, such as Roku or Android TV.

With all of that that said, it’s actually not so surprising that Honor decided to enter the TV business. Thanks to being apart of Huawei, they were able to tap into the company’s larger IoT ecosystem, which has enabled them to develop such a robust smart TV.