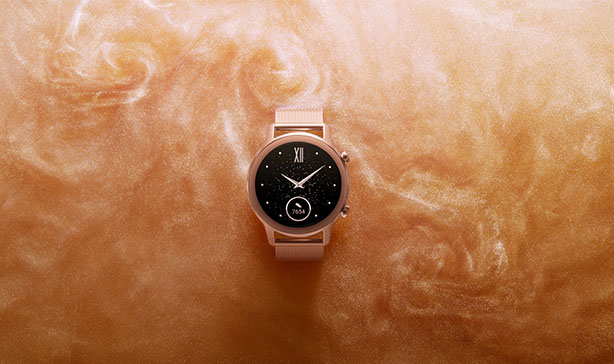 Just a couple of months ago, Huawei-owned company, Honor, launched the second generation HONOR MagicWatch that boasted an impressive 14-day battery life. Today, HONOR is launching a new series of limited edition designs for the MagicWatch 2 created by rising names in the art and graphic design industry. Together with HONOR, wearable designers and executives and design partners from design firm, Designit, HONOR were able to produce 10 new designs available in 46mm and 42mm variants.

George Greave’s design, “The Palm Tree” showcases his use of bold graphic prints. His mastery in dreamlike imagery combined with geometric elements and a muted color palette evoke an adventurous and timeless feel.

Giovanni Ozzola created 3 designs for the MagicWatch 2, “One Day”, “Old Walls”, and “Ficus”. Each design uses different techniques expected of this multidisciplinary artist and, with it, Ozzola is able to tell three unique stories with each design.

Last but definitely not the least, is the design that comes from Xu Lei’s design team, Pencil Bryan. Known for their work with high-end fashion magazines, the focus of the team’s design for the MagicWatch 2 is the Koi fish, which is a symbol of good luck and fortune.

The 46mm variant of the HONOR MagicWatch 2 houses an auto-racing watch panel and is designed to exude a sporty and bold look. The smaller 42mm variant, on the other hand, is made for the fashion-minded user. It bodes of a smooth and sleek aesthetic that would look great with any outfit. Both watches feature full AMOLED touch screens, customizable watch faces (including personal designs) and a host of other useful features. Additionally, HONOR held a Global Watch Face Design contest which attracted more than 1,400 entries. 85 watch designs were selected and will be made available for download starting February 2020.