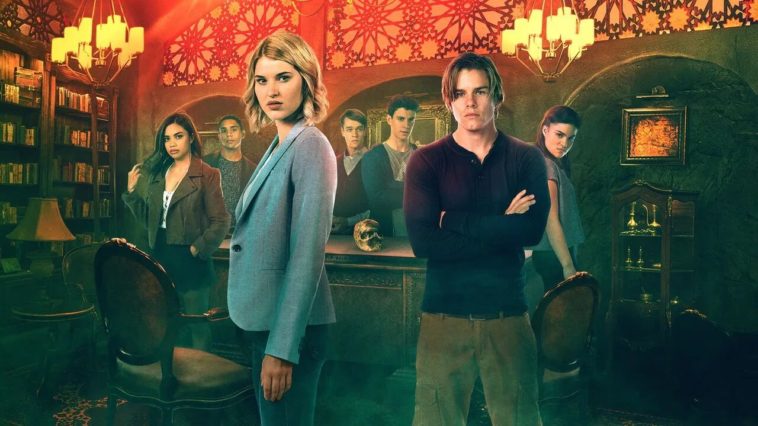 Update (November 13th): The Order has been canceled by Netflix after two seasons. On Friday evening, series creator Dennis Heaton took to Twitter to announce that the show won’t be back for a third season.

“For two seasons I was honored to work with an incredible cast and crew on The Order for @netflix,” Heaton tweeted. “It is one of the best experiences of my career. Unfortunately, we aren’t returning, but I will always cherish the memories and the props I stole. Thank you all for watching.”

Though both seasons of the horror drama have a perfect 100-percent rating on Rotten Tomatoes, this is apparently not enough for Netflix to order another season of the show. Heaton and Netflix have yet to reveal the reason behind the cancellation, but it’s likely that producing a third season would be too costly for the streamer, given all the bonuses and salary bumps that come with a season renewal, as well as additional production costs due to COVID-19.

Original story (September 14th): TV shows aimed at teen and young adult audiences that balance the usual tropes of melodrama and romance alongside horror influences have proven hugely popular over the last few years. Fans that couldn’t get enough of The Vampire Diaries, Teen Wolf, The Chilling Adventures of Sabrina, and more inevitably found themselves glued to Netflix’s The Order.

Created by Dennis Heaton, the series follows Jack Morton, a freshman student at the prestigious Belgrave University, where not all is as it initially seems. Jack’s family history is deeply tied to the Hermetic Order of the Blue Rose, a secret organization with ties to the university that trains a select few students in the mystical arts.

As well as infiltrating the Blue Rose, Jack also seeks answers about his father who abandoned him, with the first season revolving around his quest for the truth. Blaming him for the death of his mother, there was little chance of the two reconciling, but that became abundantly clear when it turned out Edward Coventry was the Grand Magus of Order and had his sights set on carrying out a nefarious plan that would result in world domination.

READ  Queer as Folk is being rebooted on Peacock

Not content with black magic, The Order also throws werewolves into the mix via the Knights of Saint Christopher, a pack who has sworn to stop their arch-nemeses by any means necessary. Along the way, Jack finds romance with fellow guide and Order member Alyssa, with the chemistry between stars Jake Manley and Sarah Grey providing the main narrative and emotional through-line in among all of the fantasy action.

Having vanquished his evil father in the first season’s finale, the deck was reshuffled for the beginning of Season 2, even more so when you factor in the memory-wiping caused when Alyssa throws a mysterious magic powder in Jack’s face, causing him to forget everything.

With the formulaic ‘quest for revenge’ plotline out of the way, the sophomore run of episodes places a greater focus on the Knights of Saint Christopher, which is a definitive positive because there’s no such thing as having too many werewolves in a TV show.

Alyssa began questioning her allegiance to the Order and her mentor Vera, who had replaced Jack’s father as the Grand Magus. There was also the problem of her magical abilities becoming wildly inconsistent, leaving her short on both trust and confidence.

Without diving too far into spoiler territory, The Order’s second season had a whole lot of moving pieces to contend with that both expanded the mythology greatly and also had to make time to focus on the cast of returning favorites. For the most part it worked, but once again a big Netflix genre series was left dangling on a cliffhanger ending, and ever since the series dropped in June fans have been desperate to find out if a third batch of episodes would get the green light.

Unfortunately, there’s no official word as of yet on whether The Order has been renewed, but as one of Netflix’s unsung cult favorites with a loyal and dedicated fanbase, the signs are looking pretty good.