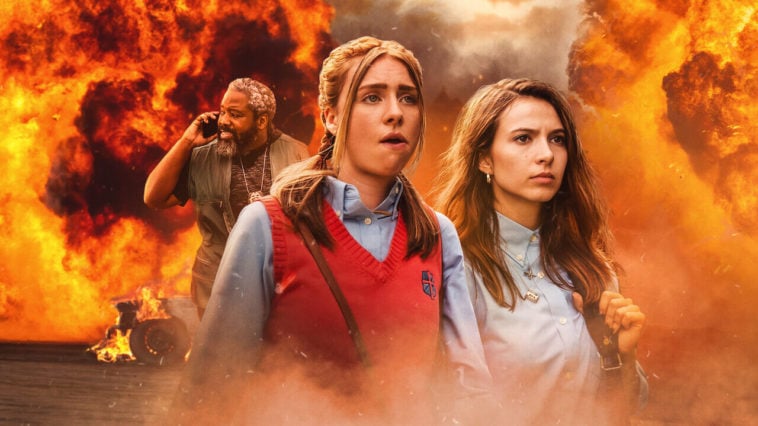 You can probably guess from the title alone whether or not you’re on board with Netflix’s Teenage Bounty Hunters. The show delivers exactly what it promises, as two teenage twin girls find themselves entering an unusual line of work after getting into an accident with their dad’s truck, forcing them to pick up some extra cash while keeping their new vocation a secret.

An interesting blend of comedy, drama, action and thriller that’s broad and accessible enough to appeal to virtually every demographic, the first episode alone firmly sets out the stall that Teenage Bounty Hunters is selling from, with a whole host of plot and character developments being put in motion throughout the premiere.

Not only do we see the accident that ends up with the title duo getting into the bounty hunting business, as veteran tracker Bowser Simmons arrives on the scene and offers Sterling and Blair Wesley an apprenticeship after being impressed with how they handled the bail-jumper that they inadvertently crashed into.

On top of that, we’re introduced to the Willingham school that the girls attend, and the deeply religious supporting players that inhabit it. There’s also the standard teen melodrama focused on female rivalries and male affection, and subplots that involve the father of one of their classmates going into hiding and Bowser hiring Sterling and Blair to work as bounty hunting interns in his wholesome yogurt shop that’s nothing but a front.

There’s a whole lot going on right from the off, but Teenage Bounty Hunters is light and breezy enough to keep everything moving forward at a brisk pace, helped immensely by two winning performances from Maddie Phillips as Sterling and Anjelica Bette Fellini as Blair. The whole fraternal twins explanation is a reasonable enough excuse as to why they don’t look like sisters, but the chemistry between the two young actresses is never anything less than solid, and they play off each other fantastically well.

READ  How well do you know these Netflix series?

The plot occasionally veers far too heavily into the melodramatic aspect that blights many similar shows, but that’s quickly offset by the sheer entertainment value that you’d expect from a show called Teenage Bounty Hunters. Kadeem Harrison steals virtually every scene he’s in as mentor Bowser, but the ensemble are generally solid across the board.

Teenage Bounty Hunters proved to be hugely popular with critics, and was one of Netflix’s best-reviewed new shows of 2020 when the first ten episodes debuted in mid-August, and it quickly grew a large following with many fans bingeing the entire season in one sitting.

Despite being one of the ten most-watched streaming shows the week it launched, Teenage Bounty Hunters has nonetheless joined I Am Not Okay With This, The Society, The Big Show Show, October Wars and V Faction on the chopping block by becoming the latest Netflix original series to be canceled after just one season. The platform is in the midst of huge cost-cutting measures that have also seen Altered Carbon and GLOW bite the dust, and unfortunately, the Wesley sisters have now been added to that list.