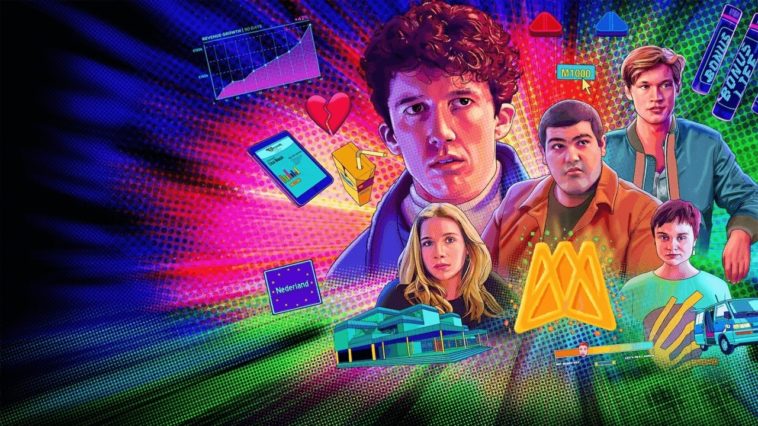 Netflix is a truly global phenomenon, but when you think of the streaming service’s original output, your mind instantly jumps to the big American or British productions, which is understandable given each nation’s standing in the industry and the budgets they have at their disposal. However, some of Netflix’s best in-house programming hails from mainland Europe, with Spanish heist thriller Money Heist drawing in 65 million viewers in four weeks. Germany has also proved incredibly fertile creative ground thanks to shows like Dark, Biohackers and How to Sell Drugs Online (Fast).

The latter is a coming-of-age drama with a heavy comedic influence set in the fictional German town of Rinseln in the very much real province of North Rhine-Westphalia. Created by Phillip Kassbohrer and Mattias Murman, the story follows high school outcast Moritz Zimmerman, played by Maximillian Mundt.

Mortiz is trying to patch things up with his ex-girlfriend, and with the help of best friend Lenny Sander he decides that the best way of going about it is to launch a small time ecstasy business. Like countless shows before it, the events of How to Sell Drugs Online (Fast) soon spiral out of control as Mortiz realizes he’s bitten off much more than he can chew as his empire starts to grow.

The first six episodes arrived in May 2019, and proved so popular that a second season was ordered just two months later. The initial run instantly set out the show’s unique appeal as a high school comedy that follows many of the familiar tropes of the genre, but also deals with the seedy underbelly of the drug trafficking business and the dark web.

Moritz had plenty to contend with as he sought to win back the affections of his ex and continue to build his empire, all while dealing with rival dealers and staying one step ahead of the law, although things are never exactly straightforward or go precisely to plan.

Season 1 looked to end on a relatively happy note as Moritz won his girl back and had established a new deal with a much friendlier supplier, but that was never going to last very long. In Season 2, Moritz finds his ego starting to get the better of him when his business starts making huge amounts of money, and he finds himself torn between wealth and happiness.

The finale used a flash-forward that showed us Moritz in the future speaking to a documentary team, offering up the big twist that he’d been under arrest the whole time, which should have a major impact on events still to unfold. Season 2 only debuted in July, but the show has already been renewed for a third batch of episodes.

How to Sell Drugs Online (Fast) is based on a true story, so there’s only a finite amount of material before it either has to end or the creators will need to start thinking up their own stories. Either way, fans will be thrilled to know that one of Netflix’s underrated gems will be back on their screens in the not-too-distant future.