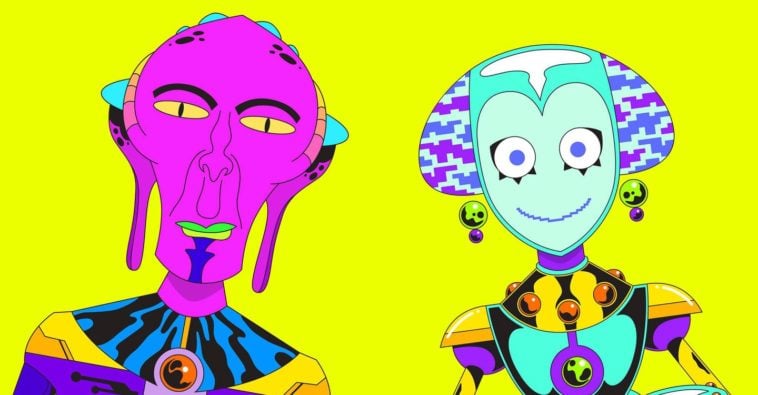 Ever since South Park and Family Guy burst onto the scene at the turn of the millennium, adult-orientated animated shows have been a fixture of late-night TV schedules ever since. Not only are those two pioneers still on the air, but they’ve outlasted countless pale imitations and boast a combined 41 seasons and 656 episodes. Bojack Horseman, Archer, American Dad, Big Mouth, Bob’s Burgers, F is for Family and so many more have occupied similar territory, but one of the more overlooked entries in the genre is Syfy’s Alien News Desk.

Co-created by animation veteran Chris Prynoski and Austin Reading, the satirical series follows news anchors Drexx Drudlarr and Tuva Van Void, who report news about our planet from the perspective of an alien species, and the twelve-episode first season is just as offbeat and bizarre as that synopsis makes it sound.

Saturday Night Live cast member Heidi Gardner voices Tuva, while the always welcome Will Forte lends his vocal talents to Drexx. Forte is one of the busiest comedians in the industry, and the 50 year-old’s versatility is the reason why so many filmmakers are desperate to work with him.

Having been on SNL himself for eight years, Forte made the jump to Hollywood and has since gone on to appear in MacGruber, The Lego Movie, Booksmart, Good Boys and Scoob!, while also starring in over a dozen episodes of 30 Rock and creating, writing, executive producing and playing the lead role for 65 episodes of Fox’s hit comedy The Last Man on Earth.

Alien News Desk has generally flown completely under the radar and the vast majority of people might not have even heard of it, which probably works to the show’s advantage. With only two characters on the screen and a heavy reliance on stock footage, there clearly isn’t much of a budget available, meaning that the writing has to remain strong enough to keep viewers engaged.

READ  Van Helsing will return for Season 5 on Syfy, but it will be its last

As a whole, the scripts are well written and often smarter than you’d expect when the targets being mined for comedy are generally the easiest ones to hit, but a lot of it comes from the idea of the aliens struggling to understand our customs or grasp our language rather than deep or insightful satire that cuts to the topical bone.

You can tell that the concept wasn’t designed to be a rating success or garner widespread critical acclaim, and there’s a real sense of warmth that comes through the screen once you realize this is just a bunch of friends making an inconsequential TV show designed to appeal to people like them. Of course, that means you’re either on board or you’re not, and Alien News Desk definitely isn’t for everyone.

The first season aired between February and May of last year, and has managed to find something of a cult following in the time since. A second season hasn’t been officially announced as of yet, and Alien News Desk doesn’t have the sort of visibility to launch a social media campaign in an effort to will another one into existence, so we’ll just have to wait and see if SyFy end up giving the official green light for more episodes.