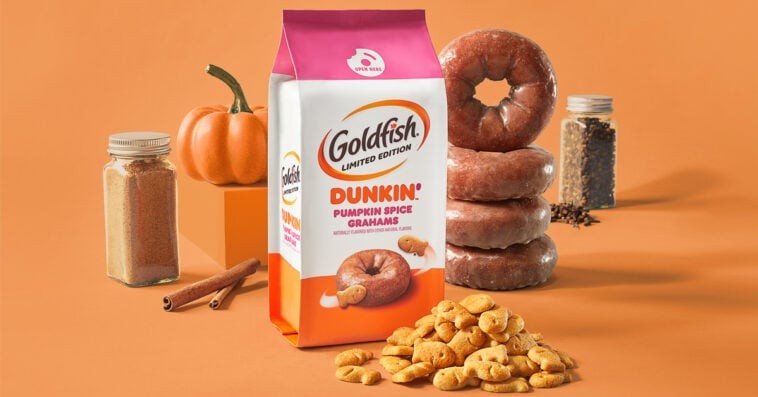 Cracker brand Goldfish has finally jumped on the pumpkin spice bandwagon with a little help from Dunkin’.

Goldfish announced on Tuesday that it has partnered with the coffee and donut company to create a pumpkin spice-flavored snack. Called Goldfish Dunkin’ Pumpkin Spice Grahams, the fish-shaped treats feature notes of pumpkin, donut glaze, and warm spices, including cinnamon, cloves, and nutmeg, giving pumpkin spice enthusiasts another exciting way to celebrate the fall season.

“The new limited-edition Goldfish Dunkin’ Pumpkin Spice Graham crackers bring together two fun and iconic brands to give pumpkin spice lovers a new way to experience the sweet side of their favorite snack,” said Janda Lukin, chief marketing officer at Campbell Snacks (Goldfish’s parent company), in a statement. “This is the first time Goldfish is tapping into the pumpkin spice season and we couldn’t be more excited to partner with the brand that knows pumpkin spice the best.”

Meanwhile, Brian Gilbert, vice president of retail business development at Dunkin’, said that the breakfast chain is “confident” that the new Goldfish flavor “will be a real treat for all the pumpkin spice aficionados out there” as the first-of-its-kind crackers “embody everything we love about this special time, from the warm pumpkin spices you find in our delicious latte or notes of our classic donut glaze in our baked goods.”

The seasonal product is officially rolling out in retail stores across the United States beginning September 1st. But on August 18th at 12 p.m. ET, Goldfish and Dunkin’ are giving fans an early access opportunity to purchase the new snack by releasing a limited quantity exclusively through TikTok. Fans who want to be one of the first people to taste the new Goldfish flavor can head to the link found in the TikTok bio of GoldfishSmiles for a chance to purchase, while supplies last!

you’re gonna wanna send this one to the GC 👀 any final guesses? @Dunkin’ #GoldfishRunsOnDunkin