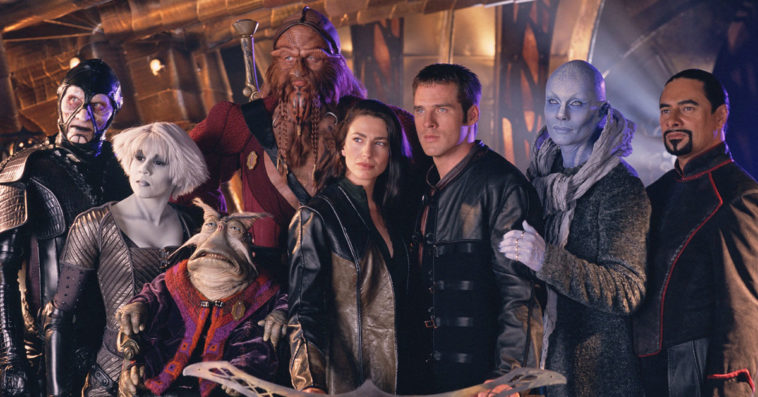 Farscape, the hit sci-fi series conceived by Rockne S. O’Bannon and co-produced by The Jim Henson Company, has arrived on the streaming space.

In line with the 20th-anniversary celebration of the show, Farscape fans, aka Scapers, can watch all four seasons of the series, plus its newly remastered mini-series finale in high definition, starting today, March 19th, on Amazon Prime Video.

In addition to the show’s debut on the streaming service, Scapers can also celebrate the series’ anniversary by attending upcoming fan events and supporting various licensing initiatives, including a special edition vinyl soundtrack that is set to be released by Music.Film Recordings and Varèse Saraband this summer. There will also be new Farscape merchandise coming out in the next few months, which will be available from Chronicle Collectibles, Toy Vault, and Trevco.

“Farscape is one of my most favorite productions, and I am so honored by the Scapers who continue to love it and share it with other sci-fi fans. Premiering the series and the beautiful HD remastered mini-series on Prime Video is a great way to celebrate the 20th anniversary with the Farscape community,” said Brian Henson, chairman of The Jim Henson Company and executive producer of Farscape.

Scapers! Join us for a Facebook Live 20th Anniversary Q&A with Brian Henson tomorrow at 12:45pm PST. Share your…

For those who aren’t familiar with the series, Farscape tells the story of astronaut John Crichton (Ben Browder) who has accidentally been hurled across a thousand galaxies to an alien world during an experimental space flight. In his mission to return to Earth, he finds himself aboard a starship populated by escaping political prisoners from various alien cultures. As John tries his best to survive in a world he barely understands, he must always be one step ahead of the Peacekeepers, a race of deadly mercenaries who will stop at nothing to capture him.

Also starring Claudia Black, Virginia Hey, Anthony Simcoe, and Gigi Edgley, among many others, Farscape has been named by TV Guide as the fourth best cult TV show of all time, following Star Trek, The X-Files, and Buffy the Vampire Slayer. It also won 2 Saturn Awards and got nominated for an Emmy.