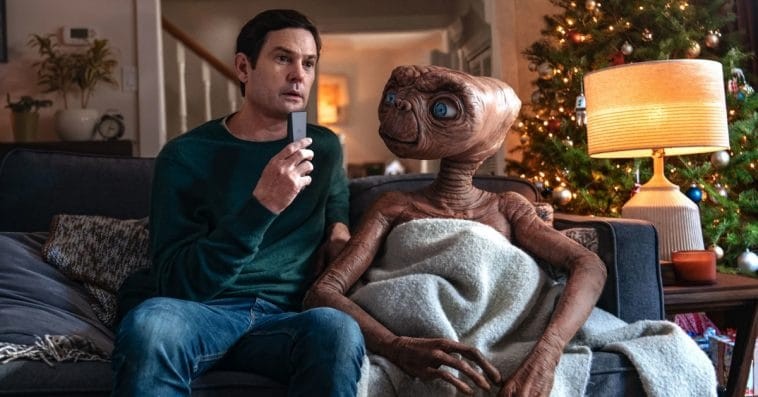 Steven Spielberg’s sci-fi classic E.T. the Extra-Terrestrial has finally gotten a sequel in the form of a Comcast Xfinity ad.

Titled A Holiday Reunion, the four-minute commercial shows a grown-up E.T. returning to Earth to visit his friend Elliott for the holidays. Now a family man, Elliott introduces E.T. to his wife, son, and daughter, who warmly welcome the extra-terrestrial creature to their home. In his short yet meaningful stay, E.T. learns a number of new technologies on the planet, including the Internet.

The commercial debuted during the Thursday broadcast of the annual Macy’s Thanksgiving Day Parade on NBC. Syfy also played the ad during linear airings of the original movie on Thursday evening. A truncated version of the video also aired during ad breaks of NBC’s primetime NFL telecast and NFL games on CBS and Fox on the same day. The commercial will continue to air through January 5th and will also be included in movie theater pre-shows during the long holiday weekend.

Speaking of the ad, Henry Thomas, who reprised his role as Elliott in the short film, said: “The audience is going to get everything they want out of a sequel without the messy bits that could destroy the beauty of the original and the special place it has in people’s minds and hearts.”

Though Spielberg didn’t have a huge role in producing the ad, the Oscar-winning filmmaker was consulted throughout the process. Spielberg previously had some ideas for a sequel but ultimately decided not to pursue any of them, thinking that it could just ruin the fan-favorite original movie.

He, however, responded positively to the idea of an E.T. mini-sequel with the theme “connection,” which was pitched by Comcast’s ad agency, Goodby Silverstein & Partners. “Looking at the storyboards, I could see exactly why Steven was really behind it,” Thomas said, “because the integrity of the story isn’t lost in this retelling.”

E.T. the Extra-Terrestrial played from June 1982 to April 1983 during its original theatrical release, grossing $359 million in the U.S. and another $304 million internationally. After earning nine nominations and four wins at the Oscars, the movie was re-released in theaters twice, boosting its worldwide cumulative gross to nearly $800 million.