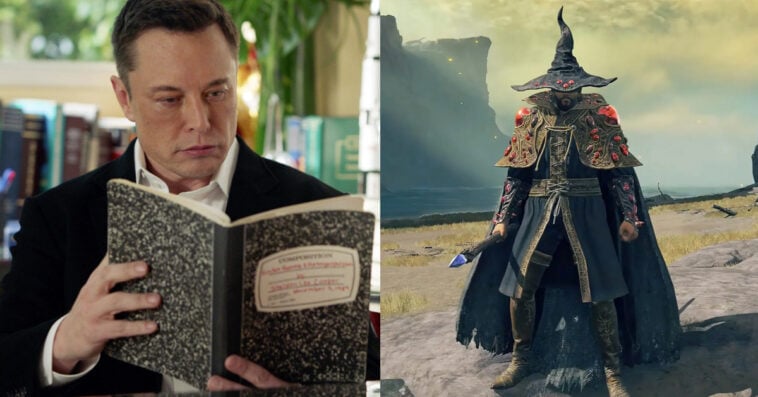 It’s no secret that Elon Musk loves playing video games, and while it’s not entirely clear what types of video games he enjoys, the SpaceX and Tesla CEO recently revealed that he is playing Elden Ring.

Last weekend, Musk commented on a tweet showing a photo of the Tree of Life mosaic from Hisham’s Palace. “Elden Ring vibes,” Musk replied to the original tweet. In response to this, one user asked Musk what kind of character he has been using in the game. And surprisingly, the soon-to-be owner of Twitter answered in detail.

Musk said that he has primarily been creating a mage with some weapon skills that specializes in Intelligence and Dexterity. “Shield in left hand, staff in right with rapier and claws fast switch,” he added of the character he is developing. “Change armor from heavy to medium for fast roll or tank. Move talismans around a lot. Many small hits in a row to damage stack is important.”

Change armor from heavy to medium for fast roll or tank.

Move talismans around a lot.

Many small hits in a row to damage stack is important.

Fans of Elden Ring know that the character Musk is building is quite common. According to ComicBook.com, in comparison to past FromSoftware titles, mage builds have been appearing more frequently in Elden Ring because of the video game’s overhauled magic system. With Elden Ring offering more ways to damage enemies with magic and spells, it isn’t surprising that Musk is interested in trying out these new features that have been introduced in the game.

Directed by Hidetaka Miyazaki and made in collaboration with fantasy novelist George R. R. Martin, who provided material for the game’s setting, Elden Ring is presented through a third-person perspective, with players freely roaming its interactive open world. Gameplay elements include combat featuring several types of weapons and magic spells, horseback riding, summons, and crafting. Elden Ring, which sold 12 million copies within three weeks of its release, has received critical acclaim, with praise for its open-world gameplay, fantasy setting, and evolution of the Souls formula.