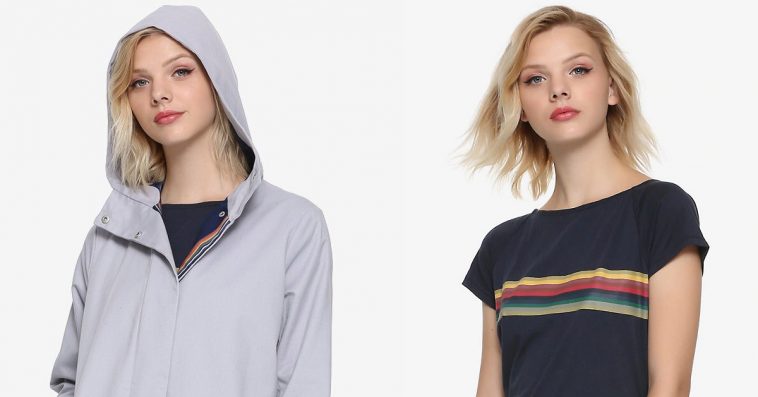 After a year of hiatus, Doctor Who is finally back on BBC America for its twelfth season with Jodie Whittaker reprising her role as the Thirteenth Doctor. And to keep the excitement surrounding the show’s return, fashion brand Her Universe has recently added new items and brought back some fan-favorite merchandise to its beloved Doctor Who collection.

The amazing lineup includes vinyl figures, mugs, water bottles, tumblers, serving platters, bags, and a wide variety of clothes. But if you’re looking to cosplay as the Thirteenth Doctor at some point in the future, then these two clothing items would do the magic for you:

A close replica of the Thirteenth Doctor’s iconic trench coat, this gray hooded outer garment features snap buttons, a rainbow strip at the interior, an interior TARDIS print, and navy blue piping at the seams. It’s also got two waist pockets and an internal chest pocket where you can keep your sonic screwdriver. Available in regular and plus sizes, this trench coat retails for $79.90-$84.90.

Made from 60% cotton and 40% polyester, this navy blue tee is the focal point of your Thirteenth Doctor cosplay, as it features the distinct horizontal rainbow stripe pattern emblazoned on the titular character’s innerwear. The shirt sells for $24.90-$32.90 and is available in regular and plus sizes.

The first half of the two-part Season 12 premiere of Doctor Who aired on BBC America on New Year’s Day, while the other half will air during the show’s regular time slot at 8 p.m. ET on Sunday, January 5th. But if you have yet to see the premiere, then you might want to consider viewing it on the big screen.

BBC America and BBC Studios are partnering with Fathom Events to simulcast the season’s first two episodes at more than 600 movie theaters in the U.S. on January 5th. After the screening, Doctor Who stars Whittaker, Tosin Cole, and Mandip Gill will take part in a Q&A transmitted from The Paley Center for Media in New York. You can buy your tickets here.