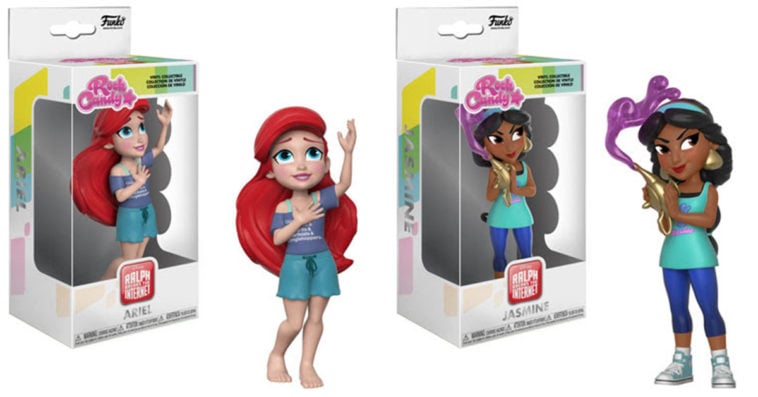 In honor of the upcoming Wreck-It-Ralph flick, Funko has created a line of Disney Princess action-figures.

Princesses? Wreck-It-Ralph? What gives, you say?!

Well, if you saw the trailer for the upcoming sequel, dubbed Ralph Breaks the Internet, you’d know that many of the girls make a cameo. But how big a role they’ll play in the movie remains unknown.

During the trailer, there’s a scene where Vanellope von Schweetz is out with the girls taking selfies. Though it’s brief, we get a glimpse at Tiana, Snow White, Pocahontas, Mulan, Elsa, Moana, Jasmine, Belle, and many others.

Funko’s upcoming line features eleven of our favorite princesses, all ditching their fancy dresses in favor of more modern attire.

For example, most of the girls are wearing graphic tees. While Elsa’s t-shirt is cute, saying “Just Let It Go”, we find Sleeping Beauties “Nap Queen” to be hilarious. Sporting a simple jeans-and-jacket combo, Mulan is arguably the best dressed of the crew. Or maybe we’re just saying that because she’s the only one wielding a weapon. Needless to say, we’d rather stay on her good side!

Interestingly, Ariel is missing her tail, but admittedly, it’s quite difficult to get around on land without feet.

Many of the dolls come holding accessories that are related to their respective characters. Tiana, for example, has a frog, Belle has a book, and Jasmine comes with a magic lamp. And, unfortunately, Snow White still has yet to learn that she should probably stay far away from apples.

Funko has yet to announce an official release date.