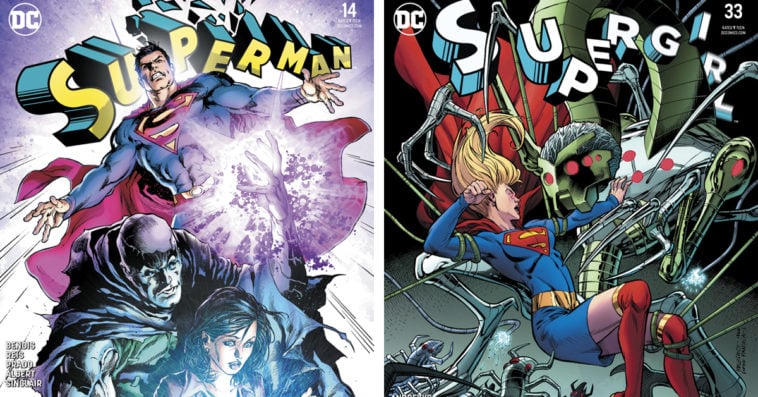 DC Comics sent an email to all its retailers last week to inform them that it will be replacing original copies of Superman #14 and Supergirl #33 with versions that have new covers.

DC Comics explained that due to advance production schedules, the original covers of both issues ultimately did not reflect the contents of the stories inside. Replacement copies with new covers will be provided to retailers free of charge, but retailers are asked to destroy the original copies of the said issues, both main and variant editions, when they arrive in stores.

Superman #14’s original cover featured Clark Kent’s alter ego crashing into the Superman logo, with Lex Luthor trying to entice Lois Lane with what appears to be magical gift. In addition to the issue’s supposed title, The Last Temptation of Lois Lane!, the cover also had the phrases Year of the Villain and Dark Gifts at the top of the cover.

The new cover of Superman #14 main edition, which you can see below, is created by Ivan Reis and Joe Prado — the same duo that created the original cover of the issue. Both the main and the variant edition of Superman #14 replacement copies are scheduled to arrive in stores on August 28th without the Year of the Villain branding on the covers.

Meanwhile, the original cover of Supergirl #33 by Eduardo Pansica will be replaced by a new piece from Kevin Maguire, which has yet to be unveiled. Both the main and the variant edition of Supergirl #33 replacement copies are set to arrive in stores on September 14th, also without the Year of the Villain branding on the covers.

Retailers will be credited for both issues on their August 21st invoices.