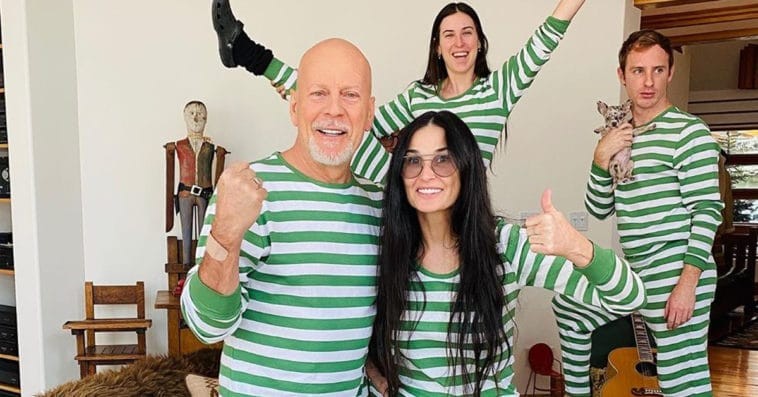 Scout Willis, the middle child of Bruce Willis and Demi Moore, has explained how her divorced parents ended up isolating together during the COVID-19 pandemic.

The exes raised eyebrows and made headlines earlier this month when a photo of the two quarantining together went viral. In the picture, Willis and Moore were dressed in matching pajamas while posing for the camera alongside each other. Behind them were Scout and Dillon Buss, the boyfriend of Willis and Moore’s youngest child, Tallulah.

Willis and Moore, who were married from 1987 to 2000, were also seen together in other family quarantine photos. But Willis’ present wife, Emma Heming Willis, and their two daughters, Mabel, 8, and Evelyn, 5, were nowhere to be seen in any of the pictures. Shortly after people began speculating about why Willis and Moore chose to quarantine together, Scout spoke to the Dopey podcast last Friday and made it clear that her parents didn’t actually plan on isolating together without Heming.

Family book club… ⁣ How to Rule the World from Your Couch — quarantine edition.

Scout explained that her father, stepmom, and stepsisters were meant to leave together for Sun Valley, Idaho, but Heming got held back for a medical emergency.

“My stepmom was going to come up here with my little sisters,” Scout said of Heming, who tied the knot with Willis in 2009. “But my younger sister … at a park, had never gotten a talk about not f―ing with hypodermic needles that she found, so she actually tried to poke her shoe with it and poked her foot.”

The incident called for a trip to the doctor, and Heming, according to Scout, chose to stay in Los Angeles while waiting for the test results. “[That’s how] my dad came up here early,” said Scout, before revealing that her stepmom ultimately decided not to join them in Sun Valley after “travel got crazy.”

While travel restrictions may be keeping Willis and Heming apart, she is staying in touch with her extended family on social media. On the viral Instagram photos showing the family wearing matching stripy pajamas, Heming left the following comments: “Not many can pull that color off. Lookin’ good squad!” and “At its finest. Love and miss you guys.”

A source told Entertainment Tonight that Willis, Moore, and Heming are all “good friends” with a “great relationship,” so their current quarantine set-up isn’t that complicated as some people think.