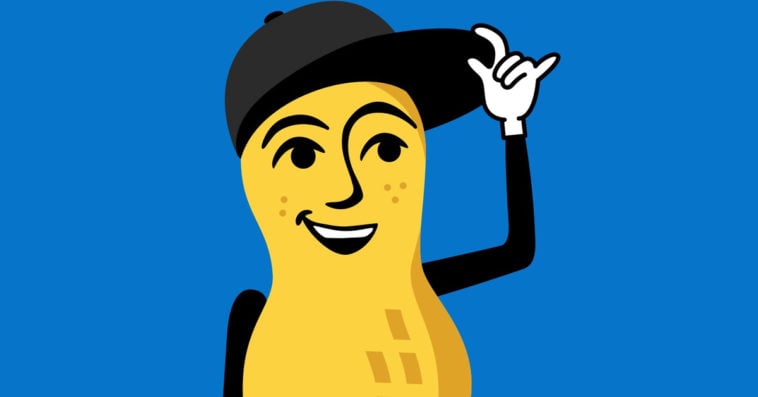 Mr. Peanut, the mascot of snack-food company Planters, has undergone yet another transformation, and a lot of people aren’t really crazy about it.

In a series of commercials released in January, Planters shockingly killed Mr. Peanut only to reincarnate him as a much younger version of himself called Baby Nut. Since then, the Planters Twitter account had been used to make posts in-character as Baby Nut. That, however, ended on Tuesday when Baby Nut was revealed to have aged into a 21-year-old young adult that goes by the name Peanut Jr.

Planters officially introduced Peanut Jr. in a video, in which the new baseball cap-wearing incarnation of the mascot dropped by a bar to celebrate his 21st birthday with a bottle of beer. To prove that he’s of legal age to get some alcohol, Peanut Jr. showed his driver’s license to the bartender, who surprisingly knows his nutty past. “So you’re telling me you fell off a cliff, came back to life as a baby, and now you’re 21?” asked the bartender. Peanut Jr. replied in the affirmative, simply explaining that “it’s been a weird year.”

I’m officially 21, my friends! Before you ask, yes, I was just a baby. What can I say? It’s been a nutty year. Now someone get this peanut a beer! #MakeMyBirthdayNuts pic.twitter.com/P1UfBIi4N8

While some people find the unexpected transformation funny, a number of Twitter users have seemingly had enough of Planters’ problematic marketing that they decided to finally block the company’s Twitter account.

The move was started by YouTube personality Mr. Sunday who tweeted out the hashtag #BlockMrPeanut with the message, “We can do this. We can let him know that all peanuts are essentially the same and he’s not special.” The hashtag quickly picked up steam and eventually became a top trending topic in the U.S.

I had to block Mr Peanut. Sick of his bullshit.

#BlockMrPeanut. We can do this. We can let him know that all peanuts are essentially the same and he's not special.

I have to go to bed but I would love to wake to a world where #BlockMrPeanut is trending. He thinks he can just push himself to the front of public consciousness though cute forced vitality. Not the year for it. I won't have it. pic.twitter.com/qfnZZUOq01

A number of Twitter users who joined the campaign aren’t convinced that Peanut Jr. is now 21, with some of them accusing him of lying about his age just to take his first sip of booze.

i am, quite frankly, disgusted by mr. peanut's reincarnation. first, he shoves his ugly marketing scheme down our throat, and then he COMMITS A CRIME. WE KNOW YOU ARE NOT 21. WHO ARE YOU EVEN TRYING TO FOOL???? I WILL END YOU, THESE HANDS DONT DISCRIMINATE. #BlockMrPeanut pic.twitter.com/DcieUlC4wA

I want to see a birth certificate, there's no way that baby nut is now a 21-years old beer drinking peanut, until then I will #BlockMrPeanut for lying to the American public and frankly engaging in dangerous behavior. pic.twitter.com/iCE8pSnvrL

#BlockMrPeanut lying about your age to purchase alcohol is illegal within the United States, Mr Peanut Jr. pic.twitter.com/CzDLEhjtMe

For some, the latest development in Mr. Peanut’s transformation made them realize how “crappy” the brand is, giving them yet another reason to block the company’s Twitter account once and for all.

While others have no plans to unblock the Planters’ official Twitter account following the introduction of Peanut Jr., there are a few people who are willing to revoke their decision as soon as the company gets some “better marketing.”

fuck you you peanut fuck.
get some better marketing @MrPeanut then it will be r e v o k e d#BlockMrPeanut pic.twitter.com/78YD7JBS1G

Though Planters has yet to comment on #BlockMrPeanut, the company has launched a sweepstake where you can win $2,100 or a Planters Prize Pack just by tweeting Peanut Jr. your dream birthday gift in 10 words or less.

To celebrate my 21st, I’m giving you the best birthday gift ever! In 10 words or less, tell me your dream birthday gift with #MakeMyBirthdayNuts and #Sweepstakes to be entered to win $2,100 or a Planters Prize Pack! Rules: https://t.co/zPV7g61gCq pic.twitter.com/OreGji7hM6