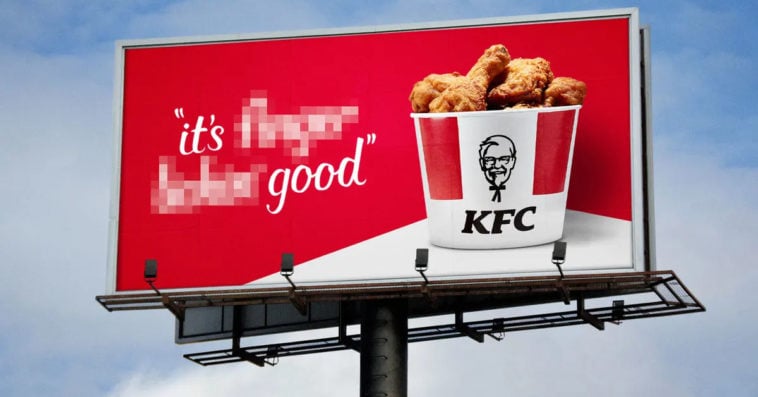 KFC is taking a break from using its famous “Finger Lickin’ Good” slogan.

The fast-food restaurant chain announced on Monday that it is temporarily dropping the tagline because it “doesn’t feel quite right” at this time when health officials are strongly advising everyone not to touch their faces to help stop the spread of COVID-19.

“We find ourselves in a unique situation – having an iconic slogan that doesn’t quite fit in the current environment,” said Catherine Tan-Gillespie, global chief marketing officer at KFC, in a statement. “While we are pausing the use of It’s Finger Lickin’ Good, rest assured the food craved by so many people around the world isn’t changing one bit.”

The announcement comes with the release of a set of photos and a video, in which the popular catchphrase is blurred out on advertising posters, packaging, signs, and billboards.

KFC’s move to suspend the use of the slogan also comes about five months after the restaurant chain pulled a U.K. advert featuring a montage of people licking their own fingers and those of their companions. More than 150 people reportedly complained about the ad to the country’s Advertising Standards Authority in March, pointing out that the ad ran counter to the recommendations of health authorities to contain the spread of the coronavirus.

As mentioned above, the catchphrase won’t be gone for good. KFC made it clear that it will bring it back “when the time is right.” After all, this isn’t the first time KFC has dropped its best-known slogan. The restaurant chain brought it back after a nearly decade hiatus in 2008.