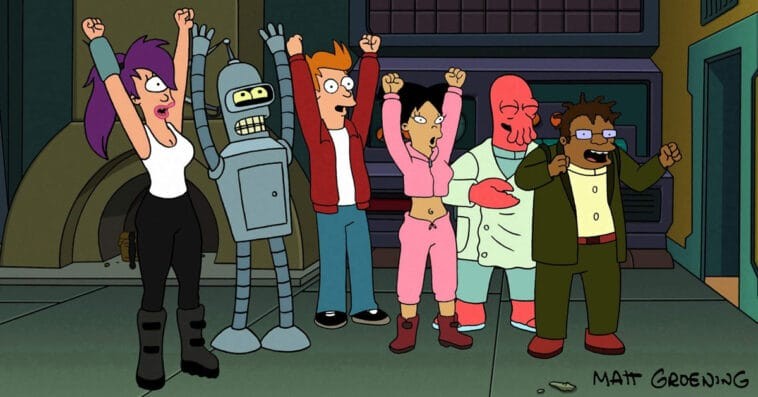 When Comedy Central canceled Futurama nearly 10 years ago, series creator Matt Groening said that the cast and crew of the animated sitcom would love to continue the show, noting that they had many more stories to tell. But are they bringing back Futurama even though people behind the show have since moved on to other projects following the cancellation?

Is Futurama over for good?

Surprisingly, Futurama is far from over. In fact, news broke earlier this week that the critically acclaimed sci-fi dramedy is making its much-awaited comeback.

It was announced on Wednesday that Hulu has ordered 20 new episodes of Futurama. The revival hails from Groening and David X. Cohen, who worked together in developing the original series.

“I’m thrilled to have another chance to think about the future … or really anything other than the present,” Cohen said in a statement announcing the Futurama revival. Groening jokingly added: “It’s a true honor to announce the triumphant return of Futurama one more time before we get canceled abruptly again.”

Will there be a season 8 of Futurama?

While it’s not clear, it looks like the 20 new episodes of Futurama will serve as the show’s season 8, as the last two seasons of the series (seasons 6 and 7) consist of 26 episodes each.

Who among the original cast will return for the Futurama revival?

After an extended deal-making period, original stars Billy West (Philip J. Fry) and Katey Sagal (Turanga Leela), along with Tress MacNeille, Maurice LaMarche, Lauren Tom, Phil LaMarr, and David Herman ― who voiced multiple characters in the series ― are all set to return for the revival.

Why is John DiMaggio not returning as Bender?

John DiMaggio, who voiced Bender Bending Rodriguez and several minor characters in the sitcom, is currently not attached to the project.

According to Entertainment Weekly, Hulu and the show’s studio 20th Television Animation went out to West, Sagal, and DiMaggio at the same time last year to begin the so-called “favored nations,” a standard negotiation process in the animation field that seeks to pay series regulars with the same rate.

While West and Sagal accepted the offer, sources told the news outlet that DiMaggio’s team did not, seeing it as a “lowball and not competitive to the market or the legacy of Futurama.” An insider claimed the “favored nations” process fell apart because West and Sagal took the offer without consulting DiMaggio, but another source refuted that notion.

DiMaggio’s side reportedly counter-offered with more competitive quotes but talks between the two parties ended last November and have not advanced since then. One thing that allegedly contributed to the standstill is the claim that 20th Television Animation doesn’t want to pay DiMaggio more than West and Sagal.

Though the search for a replacement voice actor has reportedly begun, the offer for DiMaggio to return for the revival remains on the table. As a matter of fact, after retweeting several posts in which fans expressed their desire for him to come back for the revival, DiMaggio thanked them for their concerns and promised to keep them posted on his potential involvement with the project.

Thanks for the concern and the props, everyone. I really appreciate it. Don’t worry, I’ll keep you posted, but until then… CHEESE IT! #bendergate

When will the Futurama revival premiere on Hulu?

An exact return date for Futurama has yet to be announced, but production on the revival will start this month for a 2023 premiere.

What will happen in the Futurama revival?

The original Futurama series centers on Fry, a 25-year-old pizza delivery boy who accidentally freezes himself on December 31st, 1999, and wakes up 1,000 years later with a fresh start at life and a new group of friends including Leela, a tough but lovely one-eyed mutant, and Bender, a foul-mouthed robot who loves to drink, smoke cigars, and steal anything not nailed down. Essentially a workplace sitcom, it revolves around the Planet Express interplanetary delivery company where the three main characters and other employees largely fail to conform to future society.

A synopsis or official description for the Futurama revival has not been released yet, but a statement from Marci Proietto, head of 20th Television Animation, suggests that the new batch of episodes will pick up right after the events of the season 7 finale.

“What I love about animation is that it’s possible for a successful show to take a pause and then resume years later, even on a different platform, and pick up right where it left off. ‘Futurama’ is one of those shows,” said Proietto. “The excitement from Hulu about returning Matt and David’s genius creation for all-new episodes has been off the charts. I’m thrilled that this incredible team will get to tell more stories, and that our Planet Express crew will have more adventures together. It’s a win for the fans who have loved the show since the beginning, and for the ones who will now discover it for the very first time.”

Futurama originally ran for four seasons on Fox from 1999 to 2003. After its initial cancelation by Fox, Futurama began airing reruns on Cartoon Network’s Adult Swim programming block, which lasted from 2003 to 2007 and again since 2021. It was revived in 2007 as four direct-to-video films, which were later re-edited as the show’s fifth season that aired on Comedy Central starting in 2008. Comedy Central then went on to renew the series for two more seasons running from 2010 and 2013.

Throughout its seven-season run, Futurama was nominated for a total of 14 Emmy Awards, winning six, including best animated program, outstanding voice-over performance for LaMarche, and outstanding individual achievement in animation for storyboard artists Rodney Clouden and color stylist Bari Kumar.