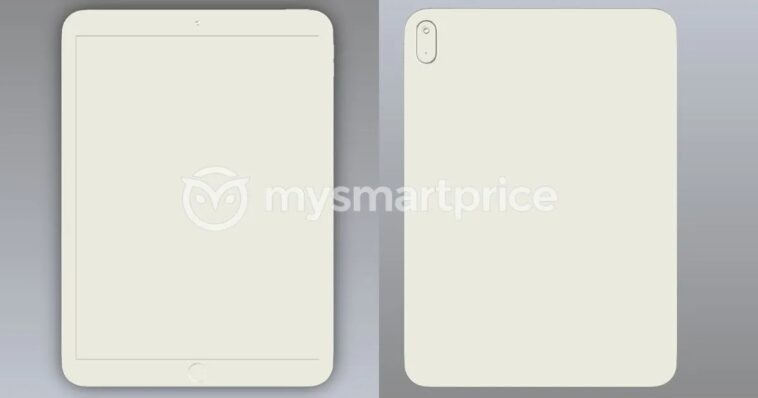 Ahead of Apple’s 2022 10th-gen iPad launch this Fall, MySmartPrice has released alleged CAD renders of the device and there’s no headphone jack in sight.

Going by the CAD renders that MySmartPrice obtained from a case manufacturer, the device could feature flat edges, a refreshed camera design, and a USB-C port.

The new iPad is expected to be powered by Apple’s A14 chip, the same chip that powers the iPhone 12 series.

In MySmartPrice’s alleged CAD renders, we see that the front of the 10th-gen iPad has the same appearance as its predecessor. The design shows a selfie camera at the top of the device and a Touch-ID home button below the screen.

The next-gen iPad will retain the ample forehead and chin bezels but will ditch the curved shape of the 2021 9th-gen iPad. The device will instead feature the flattened-sides aesthetic that Apple adopted for its recent iPhones, iPads, the 14-inch / 16-inch MacBook Pro, and the 2022 MacBook Air.

Going by the CAD renders, the design on the back of the device will also be refreshed. The renders show a protruding roundrect module design reminiscent of Apple’s 10th-gen iPhones. This may be the result of the upgraded camera components being included in the 10th-gen iPad which requires more space to fit into the device.

The camera setup features a camera island and two holes, one of which will be a camera while the other may contain an LED flash or merely serve as a microphone hole. The device also comes with an Apple logo on the back.

There is a power button at the top of the device, volume rockers on the right side, and a small hole for the charging port at the bottom of the device that has been blocked off with a red mark.

There is no way to tell what kind of charging port the device will feature, but past reports indicate that Apple might switch to USB Type-C charging and data transfer for the new device.

There is no headphone jack on the top or bottom of the device, which implies that Apple may have opted to get rid of it entirely. This comes as no surprise since Apple has been slowly removing the headphone jack from many of its devices, including the recent generations of the iPhone, the iPad Pro, iPad Air, and iPad Mini.

There are many workarounds to the missing headphone jack, such as using Bluetooth headphones, or USB-C headphones and USB-C to 3.5mm adapters, which could result in a big payday for Apple since many 10th-gen iPad owners would be forced to buy them.

The entry-level 10th-gen iPad is likely to be launched this fall, and although it is not the fanciest device in Apple’s iPad lineup, it is its best seller because of its low $329 starting price.

Ultimately, no one can precisely say whether the CAD render is accurate until the product is fully launched because changes could still be made to the design.