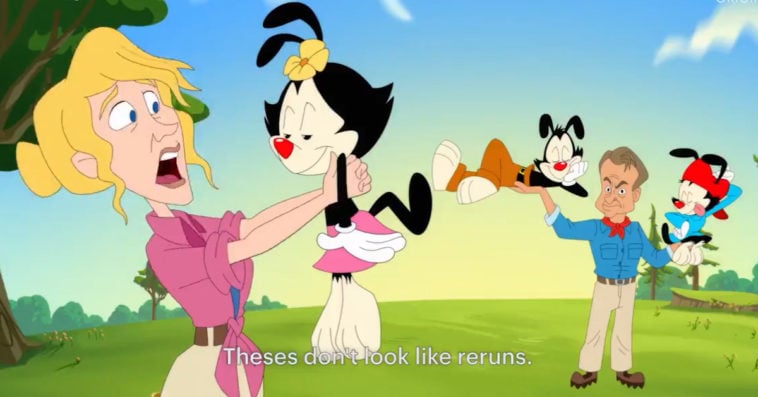 We’re just a month and a half away from the much-awaited release of Hulu’s Animaniacs revival series, and to let more people know that the classic animated show is coming back after 22 years, the streaming service dropped a new teaser video that finds Animaniacs characters Yakko, Wakko, and Dot meeting animated versions of Jurassic Park’s Dr. Alan Grant, Dr. Ellie Sattler, and Dr. Ian Malcolm.

Released as a New York Comic Con exclusive clip, the short Jurassic Park spoof starts with Dr. Grant, Dr. Sattler, and Dr. Malcolm seemingly looking for Yakko, Wakko, and Dot. “This species of cartoon has been extinct since 1998. I mean, this hasn’t been seen on TV since the golden era of animation,” Dr. Satter says while holding a photo of the Warner siblings.

Shortly thereafter, much to the doctors’ surprise, they see the Warner trio happily running down a hill. As the Jurassic Park characters try to process what they’re seeing, an animated version of Steven Spielberg appears out of nowhere giggling, confirming that the Animaniacs is indeed making a return. “He did it! That crazy son of a gun did it,” Dr. Malcom comments, referring to Spielberg, who directed the first two Jurassic Park movies and is returning as an executive producer of the Animaniacs revival.

Dr. Grant goes on to praise the new look of Yakko, Wakko, and Dot, saying that they’re now animated with “clean vectored outlines” and in “widescreen format.” And when Spielberg shares that Pinky and the Brain are also returning in the revival, Dr. Grant bursts into tears because of so much joy.

? @Hulu did it. They- they actually did it. Check out our @NY_Comic_Con exclusive clip! #Animaniacs #NYCC pic.twitter.com/U0Z9cb15Ir

Animaniacs originally ran for two seasons on Fox Kids from 1993 to 1994, and for three additional seasons on Kids’ WB from 1995 to 1998. Amblin Television and Warner Bros. Animation started to develop the Animaniacs revival back in May 2017, a few months after the show enjoyed a renewed popularity following its 2016 arrival on Netflix. Then in January 2018, it was announced that the revival will stream exclusively on Hulu in partnership with Spielberg and Warner Bros. Domestic Television Distribution.

The new Animaniacs series has an initial two-season order, with season 1 premiering on November 20th, and season 2 set to debut sometime in 2021. Both seasons have 13 episodes each.