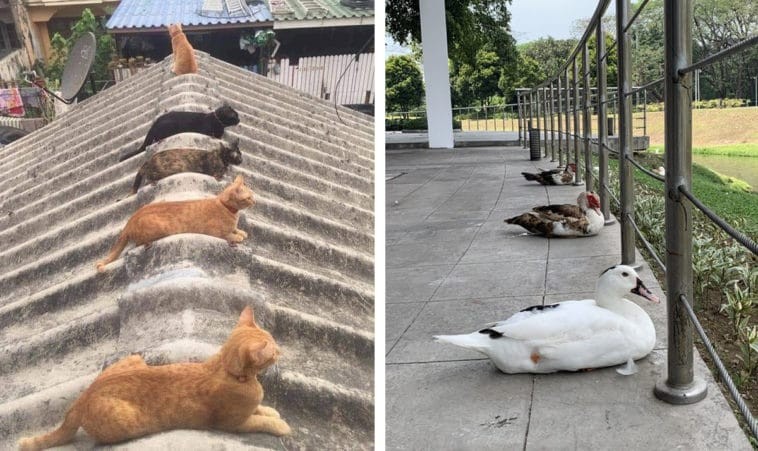 COVID-19 spreads mainly among people who are in close contact for a prolonged period of time. Transmission happens when infected individuals cough, sneeze, or talk, and droplets from their mouths or noses are launched into the air and land in the mouths or noses of people near them. To avoid that, the CDC strongly recommends maintaining a minimum of 6 feet distance between individuals in public, while the WHO advises keeping at least 3 feet. Sadly, a lot of people don’t get this and deliberately go against the instruction of health authorities.

In an attempt to make those individuals come to their senses, several people from different parts of the world have taken to social media to share photos of animals observing social distancing way better than humans. Check out the pictures of these admirably disciplined animals in the list below.

#1 One pole per seagull

Without any home to quarantine themselves indoors, seagulls seemingly make sure to practice social distancing wherever they are. In the photo above, the birds are seen perching on what appears to be river poles with equal distance from one another. While they collectively look like a line of watchmen guarding something, they’re more probably keeping their sights on their next prey.

#2 A dog falling in line among humans

Is the dog in the photo saving the space for its owner? Or does it think people are lining up for treats? Whichever the case is, the canine looks extra adorable for following social distancing measures quite impressively.

#3 A dog queuing for chicken

Taken in the Indian state of Tamil Nadu, this picture shows a dog practicing social distancing as it lines up outside an apparent chicken store. While it’s likely that the dog doesn’t know what exactly is happening, the composure and patience the animal displays make it deserving of a free whole chicken.

#4 A cat at the entrance of a grocery store 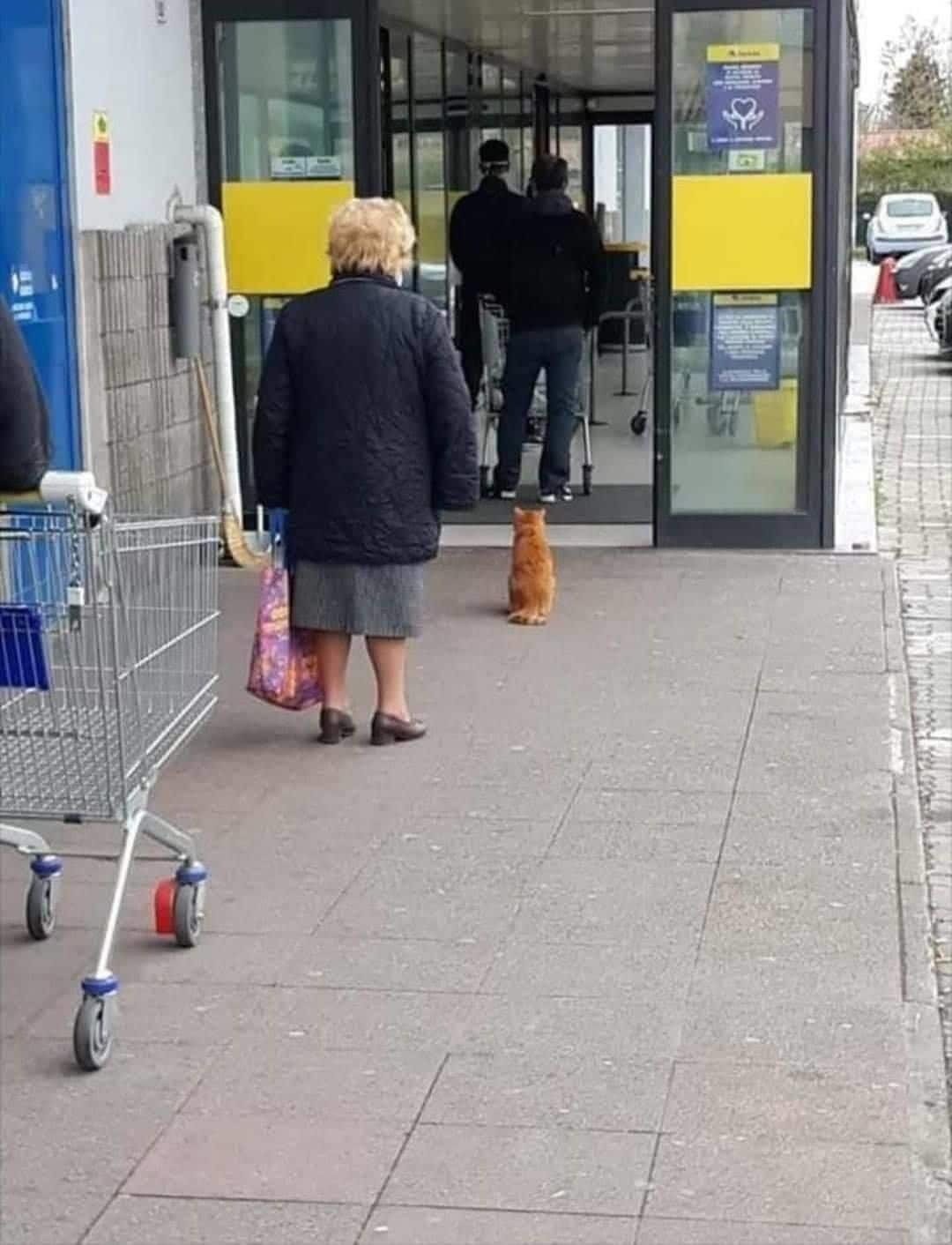 Though the cat in the photo is probably worried about hoarders buying all the canned tuna, the feline still complies with the social distancing measures and patiently waits for its turn to enter the grocery store.

#5 Peacocks getting some shade

The extreme heat of the sun forces a group of peacocks to take a rest in the hallway of what appears to be a school building. Surprisingly, the peacocks get themselves cozy, all while maintaining an appropriate distance between one another.

#6 Cats on the street

With no homes to quarantine themselves in, these stray cats from the Philippines stay on the streets. While that makes them more vulnerable to the virus, they, as seen in the photo, at least practice social distancing to help slow down the spread of the disease.

Taken at Brooklyn Heights Historic District in New York, this poster-like photo features Labradors, Lindy and Carmela, showing how social distancing is done. While the photo looks staged, it still serves its purpose of showing how people should keep a substantial distance between one another in public.

#8 Dogs in a parking lot

These homeless dogs from Dumaguete City, Philippines appear to have their own reserved parking spots. Resting under a shade, the three dogs are comfortably lying on the ground while keeping a significant distance between themselves. 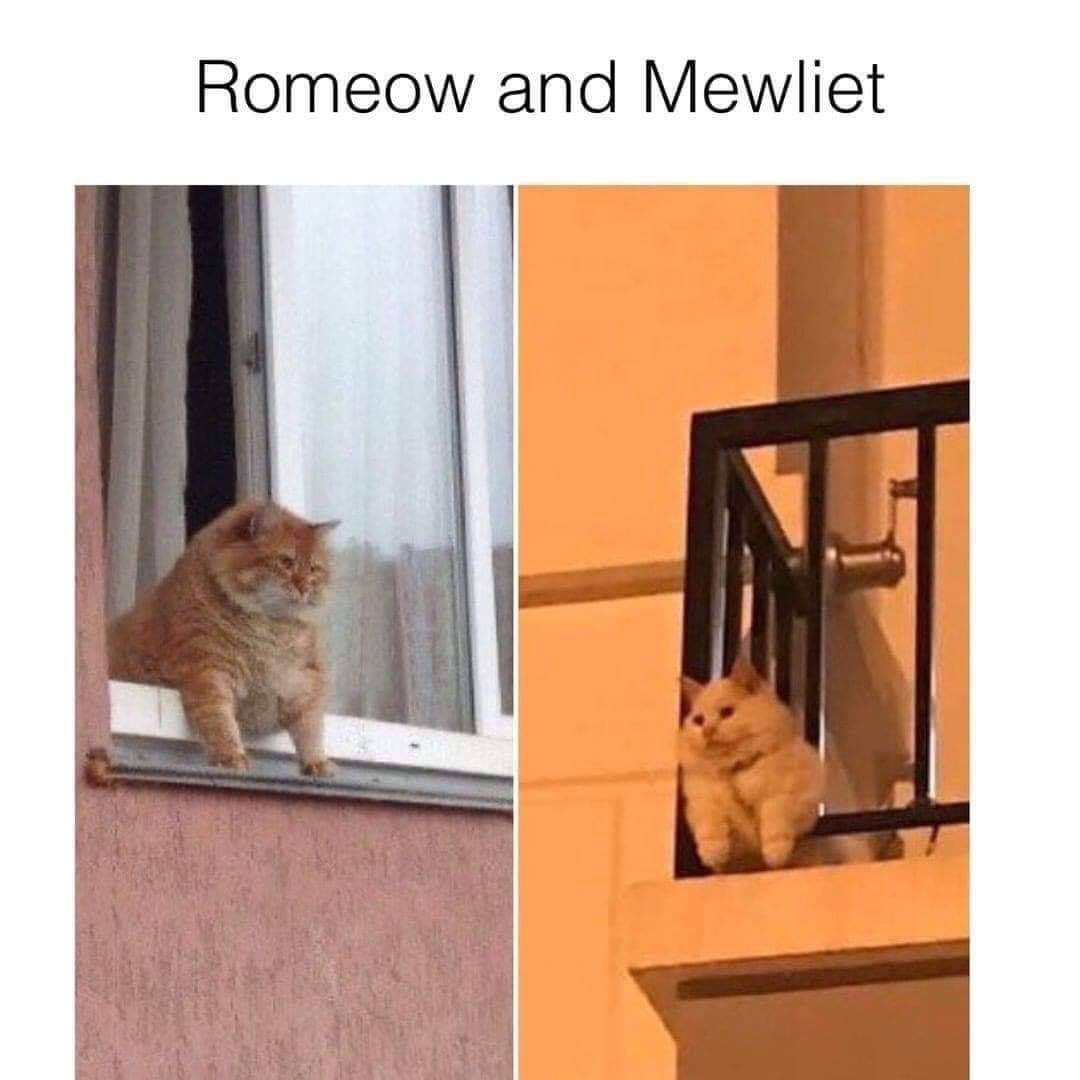 Inspired by William Shakespeare’s Romeo and Juliet, this meme shows a cat couple that has been forced to temporarily leave each other’s sides due to the ongoing pandemic. To overcome their strong longing for one another, the felines ― based on their chubby figures ― have seemingly been eating a lot since the start of the quarantine period.

Taken in Karachi City, Pakistan, this photo shows a large group of cats in a vacant lot. Probably assembling for an emergency meeting about the current global health crisis, the 13 cats in the picture impressively observe social distancing while waiting for the gathering to officially start.

Shot in Indonesia, this photo shows a clowder of cats chilling out on a roof while keeping appropriate distance between one another. While four of them sit comfortably on their bellies while enjoying the same view, one cat is positioned at the other end of the roof, seemingly serving as the group’s lookout. 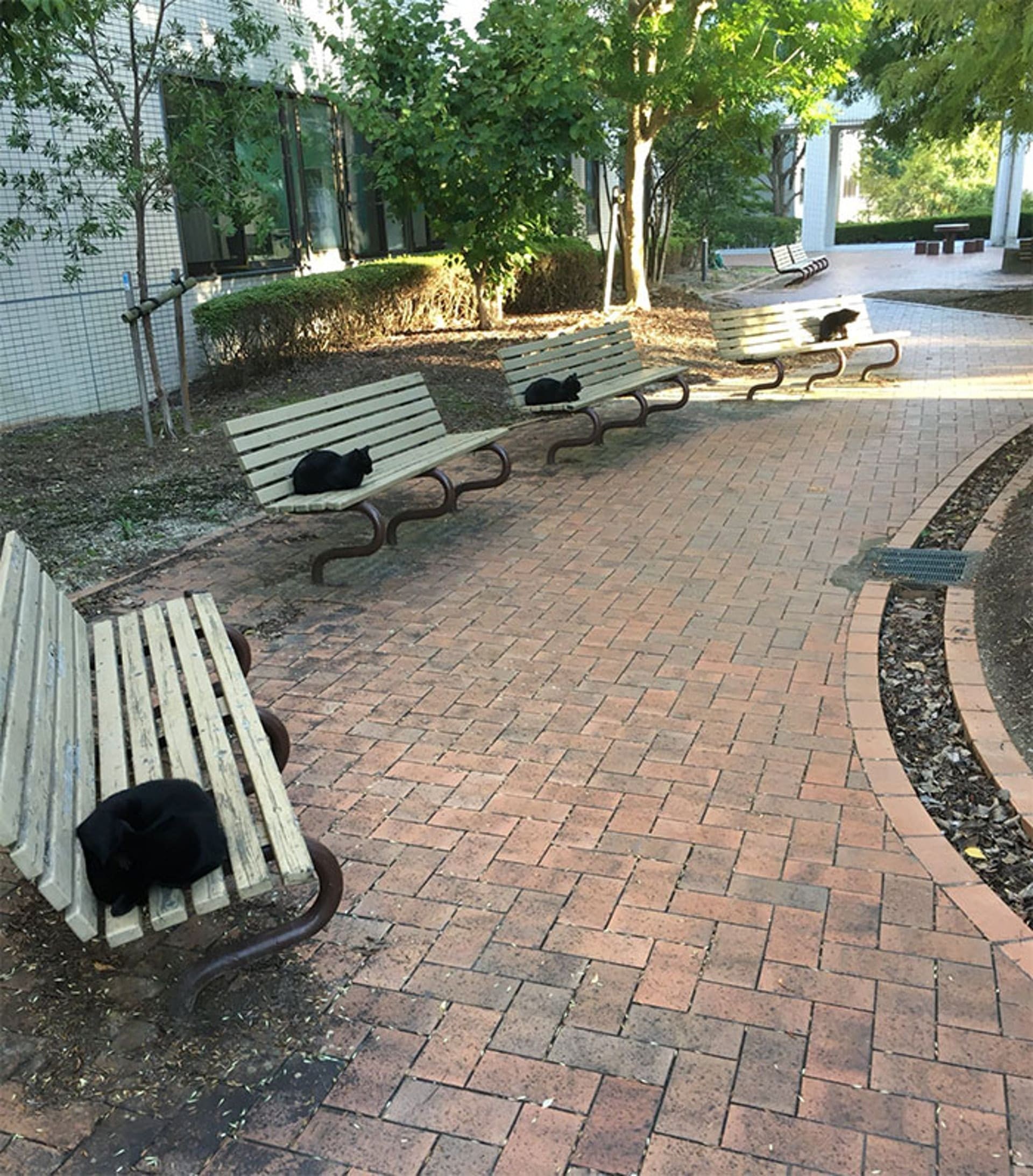 Cats’ territorial nature has apparently prepared them for the pandemic. As seen in this amusing picture, cats do not share a bench with their fellow felines ― a behavior that they have noticeably been doing all their lives long before social distancing became the new norm among people.

Taken in Japan, this picture shows four cats patiently waiting for their turn to enter an establishment. Amusingly, the felines are on queue with proper distance between one another, making the photo look like a time-lapse edit of sort.

#14 A pigeon queueing among humans 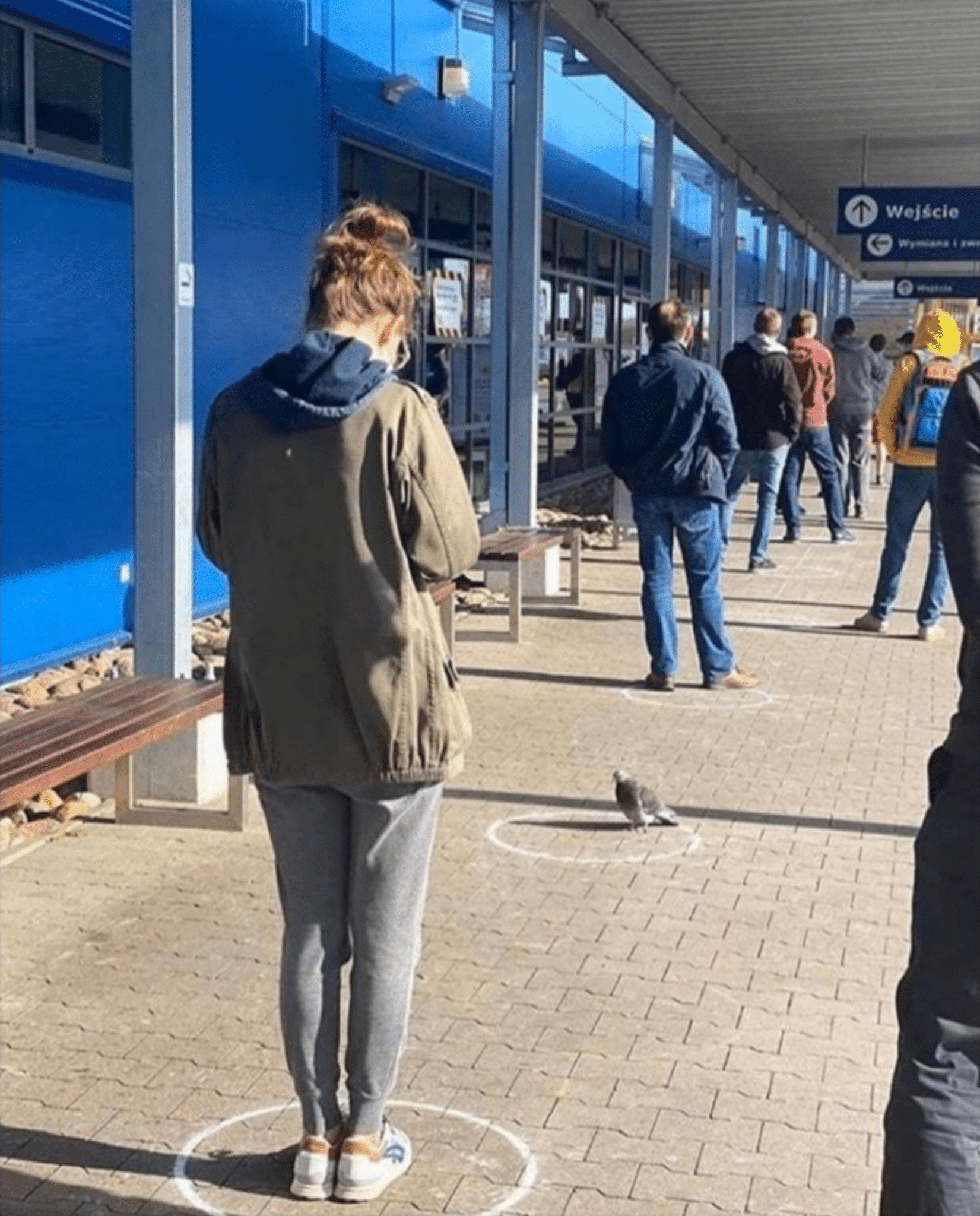 With an apparent understanding of how social distancing works, the pigeon in the photo stays inside the circle mark on the ground as it waits for the line to move. Adorably, the girl in the picture lets the bird occupy the slot in front of her ― perhaps in accordance with the popular COVID-19 slogan, “We’re all in this together.” The photo was taken in Poland.

#15 A cat inside a convenience store

Captured inside a convenience store in Thailand, the picture shows a cat practicing social distancing with the help of visual cues. Waiting for its turn to approach the counter, the feline stays in the “stand here” mark on the floor as it seemingly tries to recall everything that it needs to order.

While no birds have tested positive for COVID-19 yet, it looks like the seagulls in the photo have zero plans of letting their guard down. Lining up in an empty parking lot, the birds appear more serious than ever in maintaining social distance between them.

#17 Cats taking a break from their love-hate relationship

Frenemy cats Ginjey Bear (van cat) and Tilly (birman), who have been living together under one roof, have seemingly decided to give each other some space to prevent potential transmission of the virus. Though Ginjey Bear stays outside and Tilly is locked up inside the main house, the two felines won’t really miss each other that much as they can still easily check on one another, thanks to the glass-paneled doors and windows of their owner’s house.

#18 Cats hiding behind a wall

Taking cover behind a wall, the three cats in the photo are either hiding from someone or waiting for their next target to make fun of. But whatever they’re up to, the felines are worthy of praises for trying their best to practice social distancing at all times.

#19 Even ibises get social distancing

Though Australian white ibises are known for their habit of foraging in garbage bins, this photo shows that they get social distancing better than some humans. Featuring other kinds of birds like crows and seagulls, the picture’s focal point is the group of ibises lining up on an elevated pavement while maintaining almost equal distance between one another.

If there’s no COVID-19, the cat in the photo would have easily caught the squirrel outside the glass window. But since the feline is apparently quarantining inside the house, the cat is left with no choice but to follow its furry frenemy with just its eyes.

#21 Dogs lining up outside a minimart 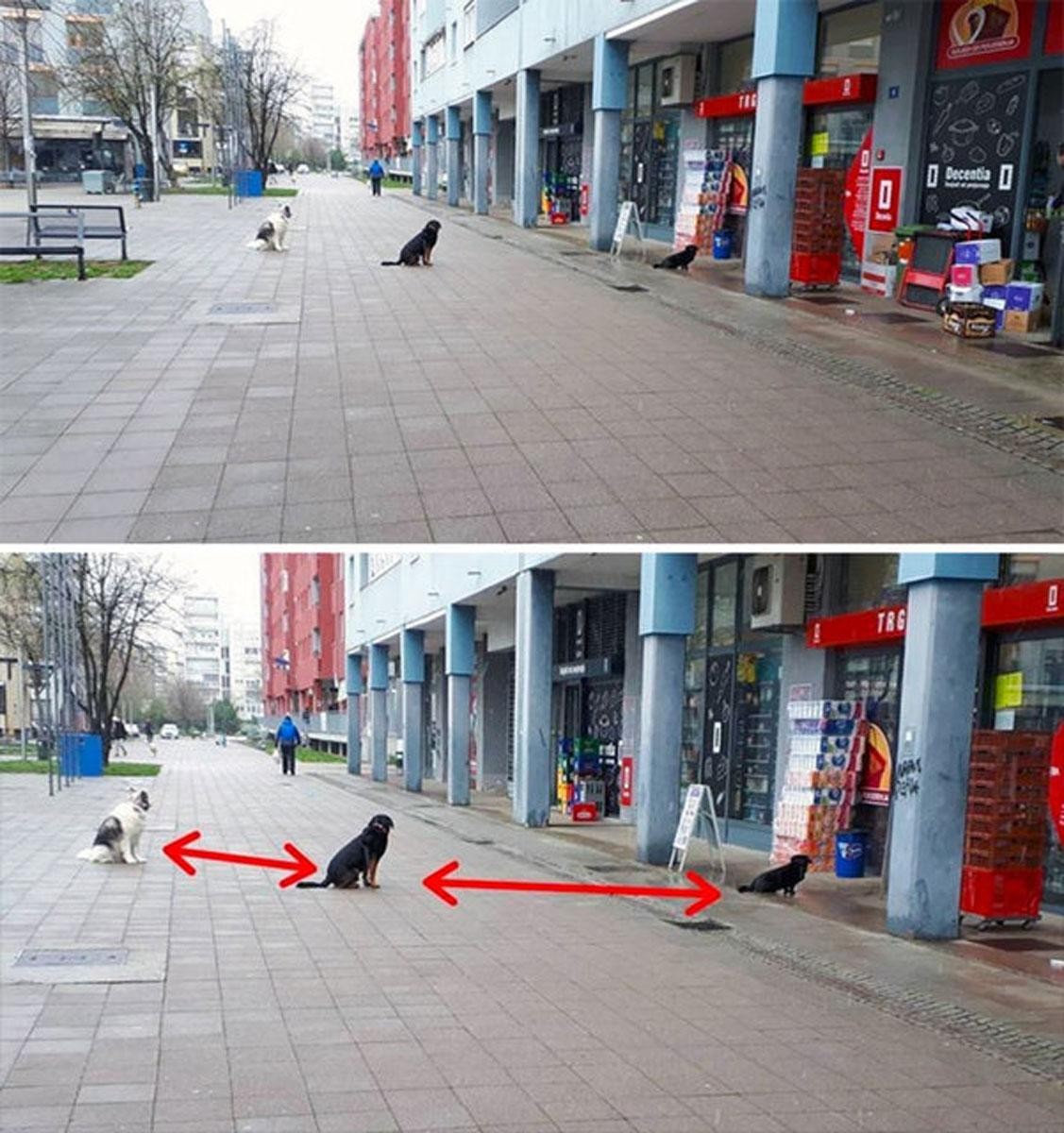 Spotted in Croatia’s capital city of Zagreb, these three dogs are keeping social distance between one another as they adorably line up outside a minimart. While they probably have more fun things to do than to be on a queue, the dogs look very patient and attentive as they wait for their turn to enter the store.

The Australian shepherd terrifyingly pushes itself against the wall when a tabby cat breaks social distancing rules and walks too close to the dog. While some may find the canine overreacting, its reaction is pretty valid, especially if you think about dogs having one life and cats having nine.

For a herd of moose in Talkeetna, Alaska, extreme cold is not a valid reason to break social distancing measures. As seen in the photo above, five moose are resting on the snow while keeping significant distance between each other uncomplainingly.

The cats in the photo are enjoying the afternoon breeze on a pathway while maintaining social distance between each other. Their peaceful chill-out sesh, however, is disturbed by the arrival of humans who get nothing but judgy stares from the felines after seemingly walking too closely towards them.

#25 Ducks in a business park

This photo was taken in a business park in Quezon City, Philippines. And with the said city having the highest number of COVID-19 cases in the entire Asian country, the three ducks in the picture are doing a great job helping slow the spread of the virus.