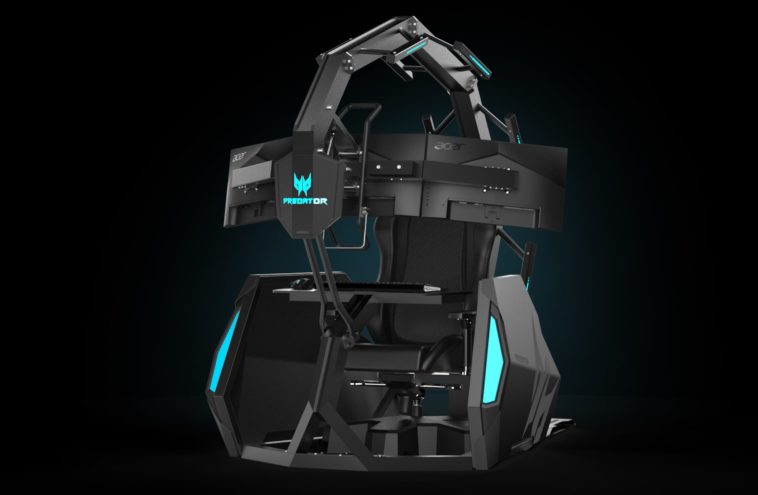 After the success of its massive 500lbs, $30,000 gaming throne, Acer is back with a slimmer and (slightly) more affordable immersion system called the Predator Thronos Air. Coming in at a whopping $13,999, this gaming chair is designed strictly with hardcore gamers in mind.

The Thronos Air boasts support for up to three monitors, an adjustable keyboard/mouse tray, sophisticated cable management, footrests, soft glow ambient lighting, camera mounts — and, oh yeah, a massage function. Gamers with extra dough can add accessories including a cup holder, headset holder, USB hub, and a complete camera set up so your Twitch or Mixer fans can watch in envy.

The Triton 300 is the latest addition Predator family of products. Boasting an aluminum build, the 300 is designed to be the lightest, most powerful gaming notebook in its class. Considering its size, the 300 packs an impressive portfolio of bleeding-edge technology, including a 9th gen Intel i7, NVIDIA GeForce GTX 1650, 16GB (up to 32GB) of DDR4 2666Hz memory, space for two 1TB PCIe SSDs, WiFi 6 support, and a 3ms 144Hz 15.6 FHD display.

The $2,799 Predator Triton 500 is slated for release in November throughout Europe, followed by North American in December. Acer says we can also expect to see the Predator Triton 300 (EUR 1,299) and Predator Thronos Air hit the market in Q4 2019.