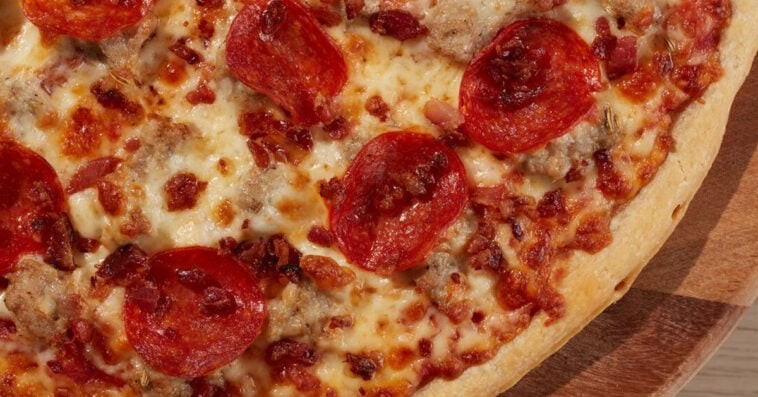 An Illinois-based frozen pizza brand has issued a voluntary recall for approximately 13,099 pounds of pie product due to possible foreign matter contamination.

What frozen pizza product is being recalled?

Home Run Inn Frozen Foods, headquartered in the south-western Chicago suburb of Woodbridge, is recalling a batch of its Chicago Premium Pizzeria Deluxe Sausage Classic after the company had received consumer complaints reporting that metal was found in the frozen pizza.

In an announcement last Sunday, the U.S. Department of Agriculture’s (USDA) Food Safety and Inspection Service (FSIS) said that the recalled product “may be contaminated with extraneous materials, specifically metal.”

Shipped to a distributor in Illinois and then further distributed to retailers, the recalled frozen pizzas were produced on June 6th, 2022, and sold in 33.5-ounce cartons with a best-by date of December 3rd, 2022. Boxes of these frozen pizzas are marked “Est. 18498-A” inside the USDA’s stamp of inspection.

Though there have been no confirmed reports of injuries or adverse reactions due to consumption of these recalled frozen pizzas, the FSIS said that “consumers who have purchased these products are urged not to consume them. The agency added that “distributors and retailers are urged not to sell these products,” which “should be thrown away or returned to the place of purchase.”

Home Run Inn Frozen Foods told CNN Business in a statement that the safety of their customers and quality of their Home Run Inn products are “paramount” so they are “working closely” with the USDA on the recall.

What is Home Run Inn?

Home Run Inn is a family-owned business with deep roots in the city of Chicago. Aside from producing a wide variety of frozen pizzas that they sell in more than 35 states across the United States, Home Run Inn also operates nine restaurants in Illinois, where they offer an extensive selection of Chicago-style pizzas.

The original Home Run Inn location, a small tavern on Chicago’s South Side, opened in 1923. Founded by husband-and-wife Vincent and Mary Grittani, the tavern received its name one fateful day when a baseball from the neighborhood park smashed through one of the tavern’s windows. Fast-forward to 1947, Mary and her son-in-law, Nick Perrino, crafted the iconic Chicago pizza recipe known today.