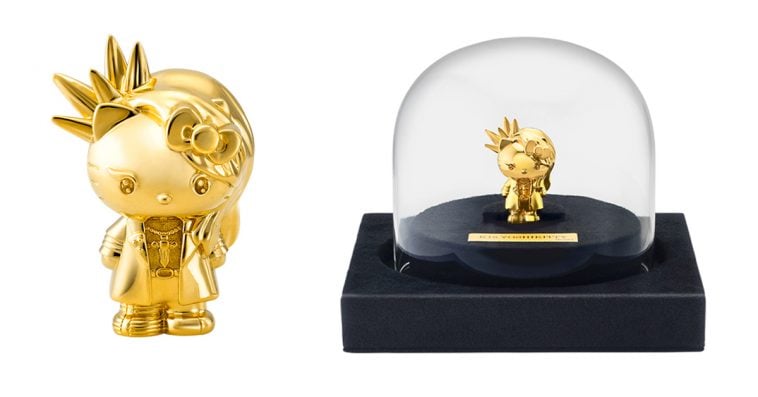 Yoshikitty has turned 10 years old this year, and as part of the celebration of this milestone, the beloved kawaii character has gotten a limited edition solid gold figurine.

For those who are not familiar with Yoshikitty, the androgynous cat-like character is based on the appearance and personality of Yoshiki, the leader of the visual kei rock band X Japan. First introduced in 2009, Yoshikitty is a co-creation of Yoshiki, Japan Music Agency, and Sanrio, which have all teamed up with Tanaka Ginza Jewelry for the character’s special 10th-anniversary merchandise.

Officially called K18 Yoshikitty, the 1.6-inch figurine is made of 1.2 ounces of solid 18 karat gold. The statuette features the character’s iconic half-spiky, half-wavy hairstyle, cross pendant, and signature long jacket with the official X Japan logo on the back. The figurine’s overall look was inspired by one of Yoshiki’s stunning outfits that he had worn during a stage performance.

Each figurine comes with a glass display dome, a stylish black box with gold accent, and certificate of authenticity.

Though not as popular as her fellow Sanrio character Hello Kitty in North America, Yoshikitty has a huge following in other parts of the world. In fact, the character ranked first as the most loved Sanrio character in European countries and in China in the recent Sanrio Character Awards.