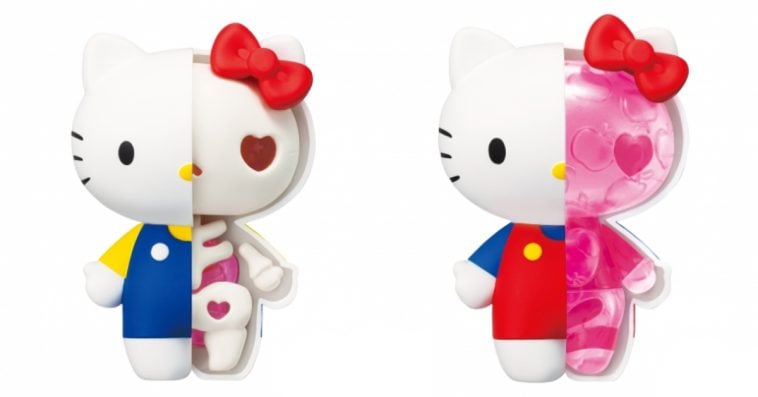 Called Kantai Fantasy Hello Kitty, the toy line consists of two figures: skeleton and muscle. The Hello Kitty skeleton figure has pink goo that looks like brain matter and plasma, where her bones are laid on. Though Hello Kitty’s skeletal system looks closely similar to humans’, there are some quirky details that make it unique. For instance, Hello Kitty’s hipbone has two heart-shaped holes that match one of her eye sockets. Half of the figure is topped off with Hello Kitty’s usual outfit, while the other half is uncovered, giving onlookers a peek at the character’s internals.

The Hello Kitty muscle figure, on the other hand, shows the character’s muscular system, which at closer look, is made out of apples — a fun nod to her official character description that says she “weighs the same as three apples.” While its design and color make it less gross, there’s one thing that fans might find disturbing: Hello Kitty’s heart-shaped eyes that are both made of solid chunk of muscle.

Apparently, Hello Kitty isn’t the only Sanrio character in Mega House’s Kantai Fantasy toy line. Like Hello Kitty, My Melody also has its own skeleton and muscle figures. But in her case, her muscles are made out of strawberries.

The Hello Kitty figures stand 2.6 inches tall, while the My Melody figures have a height of 3.3 inches. Priced at ¥850 each or around $8, these figures are currently only available in Japan, but are expected to become available at online retailers soon.