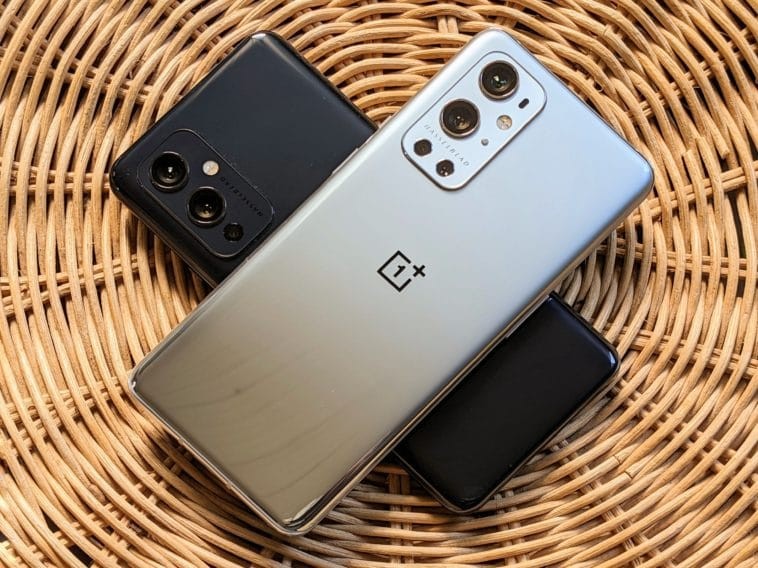 OnePlus recently launched its new Hasselblad co-branded flagships for 2021 — the $729 OnePlus 9 and $969 OnePlus 9 Pro — and I’ve been using them for a few weeks. The reviews are out and it’s obvious these are well-rounded phones. You can order them now, and they begin shipping today (April 2nd). Let me walk you through the pros and cons of each handset, and help you decide which one is right for you.

Keep in mind that here in the US, the OnePlus 9 series now goes directly head-to-head with Samsung’s (already discounted) Galaxy S21 lineup and Apple’s iPhone 12 handsets. OnePlus is no longer the value leader, and while it doesn’t quite match the competition in terms of imaging or 5G support, it brings some unique strength to the table, including delightful software and some of the fastest charging speeds in mobile.

Overall, these are large phones. The OnePlus 9 is slightly shorter and lighter than the 9 Pro, on account of a marginally smaller display, but both are otherwise almost identical. Still, they are easy to grip and feel nice in hand, thanks to the rear glass having curved edges. While the design looks modern, the color options are less fun this year, and it’s the cool Hasselblad-branded camera pod that really sets them apart.

These handsets come with OnePlus’s signature notification slider, but are made of different materials. Both have glass backs, but the OnePlus 9’s frame is plastic, which is disappointing (for a flagship). The 9 Pro’s frame is aluminum, making it look and feel significantly more premium. It’s also IP68 dust and water-resistant. Only T-Mobile’s version of the OnePlus 9 is rated IP68, despite being physically identical to the unlocked version.

In all, these phones are similar enough when it comes to hardware and design that it’s likely not going to be a deciding factor. Your pick is basically a matter of size and material preference. Is the OnePlus 9’s plastic frame a deal-breaker for you? Is the 9 Pro too tall?

So here your choice really boils down to two things. Do you prefer a completely flat screen that’s only 1080p, or a higher resolution Quad HD+ display with curved edges?

The OnePlus 9 Pro cranks things up a notch with a fourth rear camera, an 8MP f/2.4 1.0-micron 3.3x telephoto with OIS. Both phones have identical camera apps and Hasselblad tuning — which only benefits color science and the pro (manual) interface, at least for now. Imaging features are pretty much what you’d expect from modern flagships, including up to 8k video recording — not that anyone really needs that.

Performance-wise, these shooters are pretty solid, but they don’t quite match Apple, Samsung, Google, or Huawei’s best. Ultrawide and macro shots are particularly impressive thanks to that large 50MP sensor and AF lens. The OnePlus 9 lags behind the 9 Pro in low light, and captures softer pictures with the main shooter (due to the lack of OIS). It’s also outgunned when zooming beyond 2-3x, since the OnePlus 9 Pro has a dedicated telephoto.

Selfies are fine, but nothing to write home about, and the front camera lacks 4k video recording, which is pretty commonplace on flagships these days. Your decision boils down to one question: how much do you value imaging? The OnePlus 9 will satisfy most people, but the 9 Pro is definitely the flagship-worthy option here, thanks to OIS and a telephoto.

Both OnePlus 9 series handsets support sub-6GHz 5G, but there’s a catch. Here in the US, they only work on T-Mobile and Verizon’s 5G networks (including MVNO partners). If you’re an AT&T customer, you’ll be stuck on 4G LTE. In addition, only the OnePlus 9 Pro features speedy mmWave 5G. While 5G isn’t a must-have (yet), it’s good to plan for the future, especially if you keep your phones for a couple of years.

Considering Apple’s iPhone 12 models and Samsung’s Galaxy S21 lineup are compatible with any 5G network in the US (sub-6GHz and mmWave), this is a miss. On the plus side, the OnePlus 9 series packs excellent stereo speakers with Dolby Atmos, plus Qualcomm’s superb WCD9385 codec for wired and wireless (Bluetooth) audio. Basically, there’s no wrong answer here, unless you’re an AT&T customer who wants 5G.

As you’d expect from OnePlus, these handsets are incredibly fast and smooth. Between Qualcomm’s mighty Snapdragon 888 processor, 8GB of LPDDR5 RAM and 128GB of UFS 3.1 storage (or 12GB RAM and 256GB storage for $100 more), those beautiful 120Hz screens, and OnePlus’ highly optimized software, everything remains snappy no matter what you’re doing. There’s no microSD support, so choose your base storage wisely.

Battery life is decent, but not spectacular. Still, the 4500mAh battery should last an entire day for most folks. When it’s time for a refill, both phones support 65W fast charging (that’s a full charge in just 29 minutes) and ship with a 65W charging brick in the box (a $35 value). The OnePlus 9 includes 15W Qi wireless charging, and the 9 Pro bumps that up to 50W fast wireless charging (with 5W reverse wireless charging).

OnePlus’ 50W wireless charging stand costs $69 but doesn’t come with a charging brick — you’ll have to use the one supplied with your handset. Speaking of which, that charging brick is also USB PD-compatible, so you can use it to charge your favorite laptop or tablet — up to 45W. The OnePlus 9-series’ haptics are stellar, and the optical in-display fingerprint scanner is quick and reliable. Face unlock also works like a charm.

While the OnePlus 9 Pro wins on specs thanks to 50W fast wireless charging, the OnePlus 9 offers slightly better battery life because of its 1080p screen. But overall, performance and battery life are a wash — both phones deliver a great experience, so you’re safe either way.

The OnePlus 9 series runs Oxygen OS 11.2 on top of Android 11, and it’s an absolute delight. Let me explain. First, Oxygen OS remains very close to stock Android, which means it’s clean and simple. Second, it’s highly optimized, which makes it quick and responsive. Third, Oxygen OS includes helpful customizations (like auto-scrolling screenshots), for an even more refined experience. As such it’s a major differentiator for OnePlus.

Not only do both handsets benefit from Oxygen OS, but the unlocked models are free of bloatware, with Netflix being the only pre-installed app (beyond Google and OnePlus’ own). That won’t be the case with T-Mobile’s version of these phones — so keep this in mind when making your selection.

Now that you know how the OnePlus 9 and 9 Pro differ, let’s pick the one that’s right for you. At $729, the OnePlus 9 is more affordable, so if you’re on a tighter budget, it’s the obvious choice — after all, you’re still getting 90% of the 9 Pro experience for $240 less. The $969 OnePlus 9 Pro adds a metal frame, a higher-resolution display, OIS and a telephoto camera, mmWave 5G support, and 50W fast wireless charging.

How much do these improvements matter to you? That’s the real question. If any of them do — and you can afford it — the OnePlus 9 Pro is definitely the one for you. Do you care about imaging performance? Get the 9 Pro. Can you see the difference between a 1080p and Quad HD+ screen? Get the 9 Pro. And if you’re an AT&T customer that absolutely needs 5G support, avoid these handsets and buy something else.

Ultimately, what makes this decision harder is that Samsung’s Galaxy S21, S21+, and S21 Ultra are already discounted on a regular basis, with prices often dropping to $700, $800, and $1000, respectively. All three feature better cameras and 5G support than the OnePlus 9 series, but worse software and charging speeds.