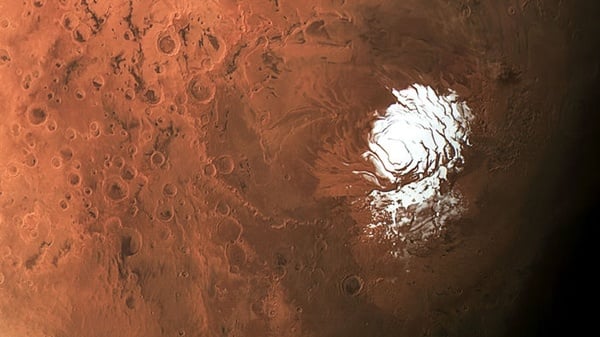 The European Space Agency’s Mars Express spacecraft just discovered a large, 12-mile underground lake near Mars’ southmost polar ice cap. The monumental finding could finally put an end to the on-going debate in regards to the existence of liquid water – and possible life on The Red Planet.

From 2012 to 2015 a small group of researchers used a radar instrument on the Mars Express known as MARSIS to seek out the subterranean lake. By launching a series of radar pulses and listening for the reflection, the team was able to deduce that the lake is roughly a mile under Mars’ Planum Australe region.

Although MARSIS was precisely engineered to make such a discovery, researchers working on this particular mission found the processing power of the 14-year-old instrument to be subpar. As a result, the team devised an ingenious plan that enabled the radar data to be sent directly to Earth to be analyzed by more capable processing tools. Due to the low sample rate of the onboard equipment, some say the team may have never discovered the lake without their forward-thinking.

Going further, the lake was discovered by focusing on a very small area of Martian land. Many members of the research team believe that this discovery will lead to a surge in activity in the field – resulting in even more interesting findings.

Adding to the excitement, scientists say Earth has similar underground lakes near its polar regions. Back in 2014, researchers discovered Lake Whillans – a subterranean lake located in West Antarctica – contains thousands of microbial organisms that have thrived in the lake for millions of years.

Such a discovery has led some to wonder if similar microbial lifeforms may reside in this newly discovered lake on Mars. According to Astronomy.com, however, while it’s tantalizing for us to ponder about alien life on Mars, it’ll likely be several decades before humans establish a foothold on the planet.