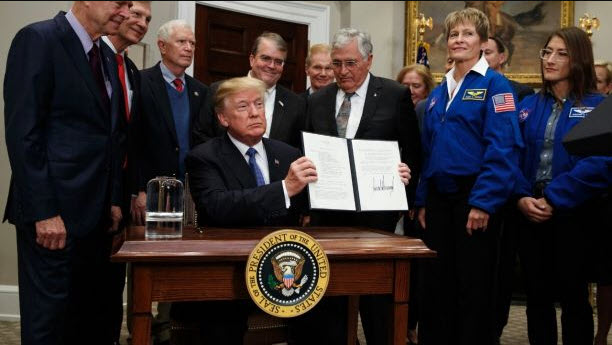 President Donald Trump has vowed to take all necessary measures to ensure that the United States remains the world leader in space technology. And to assert this technological superiority over other space-faring nations, the President wants American astronauts to return to the Moon.

But unlike the 1969 lunar voyage, this time the trip to the Moon must not be confined to merely hoisting the American flag and leaving footprints, President Trump said. He wants it to be a prelude to future manned missions to Mars, and possibly to other distant worlds at some point in the future.

“This time, we will not only plant our flag and leave our footprint, we will establish a foundation for an eventual mission to Mars,” Trump said. “And perhaps, someday, to many worlds beyond,” the President said.

Trump made these promises while marking the 45th anniversary of the Moon landing by Schmitt and Eugene Cernan, the commander of Apollo 17. Cenan, who happens to be the last man to walk on the lunar surface, passed away earlier this year at the age of 82.

It is worth noting that Trump is not the first president since 1969 to have made the promise to return to the Moon. Several past presidents, including George H.W. Bush, and later his son George W. Bush, also made similar proposals to return to the Moon, and to embark on a maiden manned voyage to the Mars. Unfortunately, all of these proposals had to be shelved because of budget constraints.