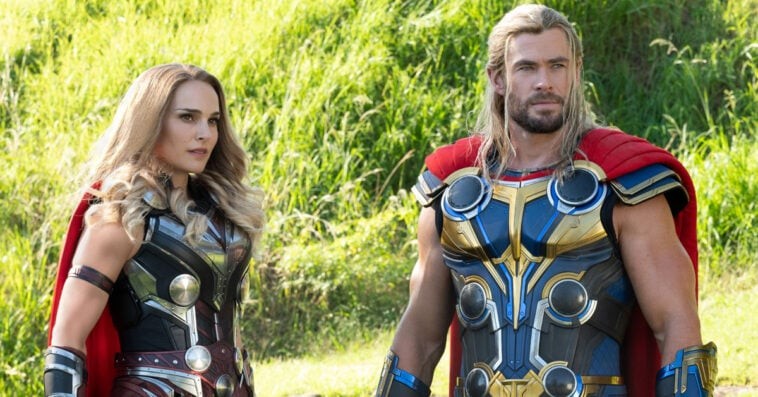 Thor: Love and Thunder, aka Thor 4, will answer all the burning questions about Thor’s (Chris Hemsworth) off-screen split with his former girlfriend, Jane Foster (Natalie Portman).

Table of Contents show
Why did Thor and Jane break up?
What will happen in Thor 4?
Thor 4 cast
Thor 4 trailer
Thor 4 release date

Why did Thor and Jane break up?

Portman’s Jane was introduced as Thor’s love interest in the 2011 movie Thor. The actress reprised her role in the 2013 sequel Thor: The Dark World but didn’t appear in 2017’s Thor: Ragnarok. To explain Jane’s absence in the latest Thor movie, the titular character mentioned in passing that he and Jane had broken up. “She didn’t dump me, you know. I dumped her. It was [a] mutual dumping,” Thor said at some point in the film.

Though no other details had been shared about their split since then, Hemsworth revealed in a recent interview that things surrounding Thor and Jane’s breakup will become clearer when Thor 4 comes out in theaters.

“We had a lot of fun exploring that, and answering a lot of the unanswered questions from the second film [onwards], when they parted ways,” the actor told Total Film. “That was left pretty open, and up for interpretation, as far as who dumped who? What actually happened there? Did they keep in contact? What were their feelings about how that all ended? We had some good times diving into all of that.”

What will happen in Thor 4?

Following the events of 2019’s Avengers: Endgame, Thor (Hemsworth) attempts to find inner peace but must return to action and recruit Valkyrie (Tessa Thompson), Korg (Taika Waititi), and Jane Foster (Portman) — who has become the Mighty Thor — to stop Gorr the God Butcher (Christian Bale) from eliminating all gods.

“It’s been about eight years [since we saw Thor and Jane together on screen],” Waititi, who also directed and co-wrote the movie, told Empire Magazine. “She’s had a whole other life, and then the love of your life comes back on the scene, and is now dressed like you. It’s a real mindf—k for Thor.”

In addition to the abovementioned actors, the cast of Thor: Love and Thunder also includes Jaimie Alexander as Sif, Russell Crowe as Zeus, as well as Chris Pratt, Pom Klementieff, Dave Bautista, Karen Gillan, Vin Diesel, and Bradley Cooper, who are all reprising their Guardians of the Galaxy roles.

Thor: Love and Thunder will hit theaters on July 8th.