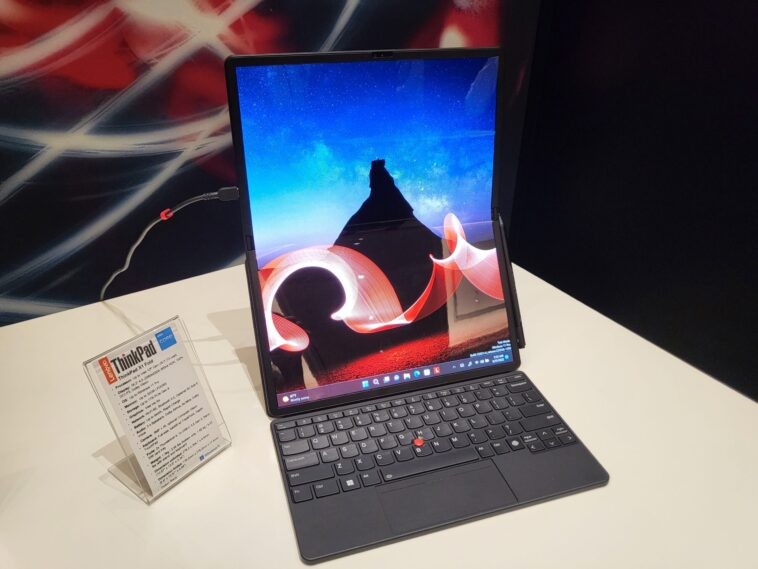 Lenovo has unveiled the second generation of its ThinkPad X1 Fold foldable PC. The device is a reinvention of the foldable PC form factor that Lenovo first introduced back in 2019, and it promises to offer better performance this time around, as well as a larger 16-inch screen.

Lenovo says it incorporated customer feedback and user insights to redesign the ThinkPad X1 Fold’s hinge and panel, resulting in a bell-shaped hinge system that allows the device to be folded flat irrespective of whether it’s open or closed. This design change allows the new X1 Fold to sport a thinner frame than its predecessor.

The next-gen ThinkPad X1 Fold features a larger 16.3-inch 2024×2560 OLED foldable screen with thinner bezels and a thinner frame when compared to its predecessor. Battery life is supposed to be improved this time around too.

The ThinkPad X1 Fold can be configured with up to 32GB of RAM and a1TB SSD. Lenovo says that performance is much better this time around – and we certainly hope so because its mediocre performance was a gripe that we had with the first generation ThinkPad X1 fold.

An optional full-size backlit ThinkPad keyboard can be magnetically attached to the screen to simulate a 12-inch laptop experience. This keyboard has also been updated and designed to be modeled after the ThinkPad X1 Nano’s keyboard.

What makes this device so versatile is that it supports various modes to match different use cases, such as the classic clamshell laptop mode, landscape mode, portrait mode, book mode, and tablet mode.

The Lenovo ThinkPad X1 Fold is priced at $2,499 and will be available to purchase starting in November 2022.