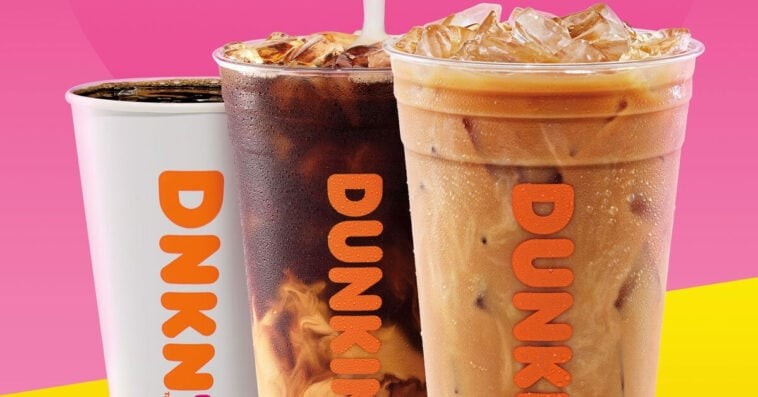 Aside from its selection of incredibly tasting donuts, Dunkin is also known for its various coffee offerings. While many customers purchase caffeinated Dunkin drinks to deliberately gain increased mental alertness, others simply order a beverage that goes well with their favorite Dunkin’ baked goods. But whatever your go-to Dunkin beverage is, it always pays to monitor your caffeine intake. With that said, here are the Dunkin drinks that have the most and least caffeine.

What Dunkin drink has the most caffeine?

The Dunkin drink with the most amount of caffeine is the Energy Cold Brew. Made with the chain’s signature cold brew coffee with a shot of freshly-brewed espresso, a medium cup of this drink contains 378 milligrams of caffeine.

The Energy Cold Brew was added to Dunkin’s menu back in 2019. While you may no longer be able to order it by name, you can still ask for a cold brew with a shot of espresso.

What is the least caffeinated drink at Dunkin?

Dunkin’s least caffeinated drink is Frozen Chocolate. A medium cup of the non-coffee drink only contains 6 milligrams of caffeine.

The Sweet Iced Tea and the Sweetened Iced Tea are tied as the second least caffeinated drink at Dunkin. A medium cup of each drink comes with 63 milligrams of caffeine.

The third least caffeinated Dunkin’ drink is the Sweetened Iced Green Tea. A medium cup of this drink comes with 64 milligrams of caffeine.

Does Dunkin decaf have caffeine?

If you are experiencing insomnia, anxiety, headaches, irritability, jitters, nausea, or increased blood pressure after consuming a cup of regular coffee, you can consume decaf coffee as an alternative if you can’t completely stop drinking coffee.

What Dunkin drinks have no caffeine?

Unbeknownst to many, Dunkin offers a few caffeine-free drinks. These include all three flavors of Coolattas (Blue Raspberry, Strawberry, and Vanilla Bean) and the herbal infusions Chamomile Fields, Cool Mint, and Hibiscus Kiss.

Does Dunkin Donuts have any non-coffee drinks?

Almost half of all Dunkin drinks lineup are non-coffee beverages. These include teas, matcha drinks, chocolate drinks, chai drinks, Coolattas, and Dunkin’ refreshers. Though these are all non-coffee, not all of them are caffeine-free.

What is the best-selling drink at Dunkin Donuts?

Dunkin doesn’t disclose its top-selling drink on a regular basis, but in a blog post back in 2017, the chain revealed that Iced Coffee was its best-selling drink, based on the data from the company’s On-the-Go Mobile Ordering that year.

Dubbed as America’s favorite cup, Dunkin’s classic Iced Coffee is made from 100% Arabica beans that are freshly ground and continuously brewed. The drink’s best-selling status was not surprising at all, as the classic cup of joe is a staple in any setting all year round.

What flavors can you add to Dunkin Donuts coffee?

If you’re feeling a little adventurous, you can always put additional flavor to your Dunkin coffee.  As you may have probably noticed when placing your order, Dunkin has flavor shots and swirls that can spice up the taste of your coffee.

What is the most popular product at Dunkin Donuts?

Dunkin’s most popular product changes by season but generally speaking, the chain’s coffee is its most popular item. According to a 2020 report by Mashed, Dunkin sells about 60 cups of coffee every single second, totaling over 2 billion cups of coffee served worldwide in a single year. The customers’ undeniable love for Dunkin’s coffee is one of the reasons why the chain decided to officially shorten its name from “Dunkin Donuts” to simply “Dunkin”.

What is the biggest drink at Dunkin Donuts?

The biggest of all Dunkin drinks is the chain’s 32-ounce, large-sized Iced Coffee. For comparison, an extra-large cup of Dunkin’s hot coffee only holds 24 ounces of drink.

What’s The Charli at Dunkin?

Created in partnership with TikTok star Charli D’Amelio, The Charli was one of the limited-time Dunkin drinks that were introduced to the chain’s menu in 2021. Debuting in February of that year, the beverage was created quickly became one of the most popular items on the chain’s menu.

Based on D’Amelio’s go-to Dunkin drink, The Charli is basically a medium cold brew with whole milk and three pumps of caramel swirl. Despite being a limited-time-only drink, The Charli’s ingredients are available all year, so guests can order the drink any time. There are currently two Charli drinks at Dunkin: The Charli and The Charli Cold Foam.