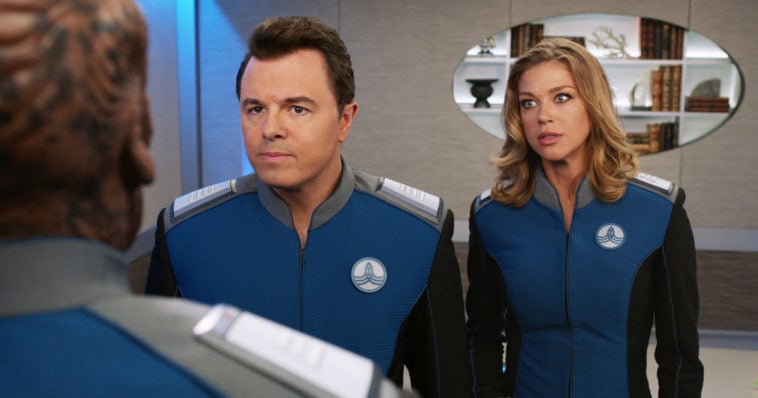 Don’t expect to see The Orville in Fox’s TV schedule this midseason for two reasons. First, the third season of The Orville will air exclusively on Hulu rather than on Fox. And second, the new episodes will not be released until the end of 2020.

Seth MacFarlane revealed the news at the show’s San Diego Comic-Con event. Previously, The Orville had aired on Fox for its first two seasons, but the new season will be released on Hulu, which currently has Season 1 and Season 2 available to its subscribers.

The Orville is a live-action drama set 400 years in the future starring MacFarlane, Adrianne Palicki, Penny Johnson Jerald, Scott Grimes, and others. The one-hour drama, which is produced by 20th Century Fox Television and MacFarlane’s Fuzzy Door Productions, explores the story of an exploratory spaceship named U.S.S. Orville

Step aboard #TheOrville for season 3, as we move to our new home on #Hulu! pic.twitter.com/UrsKUxRL0x

Apparently, MacFarlane’s current busy schedule and the amount of time necessary to shoot scenes and finish special effects sequences prompted the showrunners to push back the Season 3’s release date. The Orville Season 3, which was expected to be released this coming midseason, is set to be released at the end of next year.

The first two seasons of The Orville debuted in September 2017 and December 2018 respectively. Speaking at the Comic-Con panel, MacFarlane praised both 20th Century Fox Television and Fox Entertainment for the “spectacular job of marketing, launching and programming” The Orville.

The actor explained that it would be “challenging for the network” to deliver new episodes until 2020, which is why the Season 3 release date had to be pushed back. MacFarlane also said that he is looking forward to their new partnership with Hulu to “explore the galaxy together.”

The Orville was created and written by MacFarlane, who also serves as an executive producer on the TV series along with Brannon Braga, David A. Goodman, Jason Clark, and Jon Cassar.