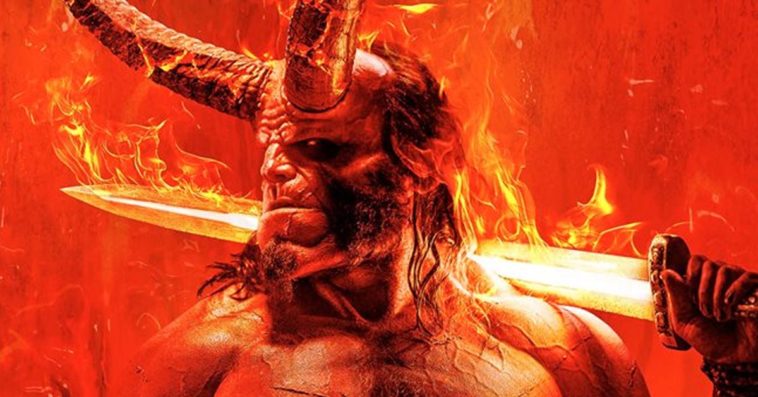 Three months after its exclusive premiere at New York Comic Con in October, the first trailer for the Hellboy reboot is finally out for everyone to see.

The two-minute video starts with the gates of hell already open. As winged beasts wreak havoc in the city, Hellboy’s (David Harbour) adoptive father Trevor Bruttenholm (Ian McShane) can be heard saying that Hellboy with his “strong right hand” is the only one who can put an end to the seemingly “forever war” between monsters and humans.

But Hellboy isn’t particularly happy about how Trevor — founder of the Bureau for Paranormal Research and Defense (B.P.R.D.) — is using him against his fellow monsters. “You made me a damn weapon,” Hellboy tells his dad disappointingly.

In an attempt to keep Hellboy’s allegiance, Trevor explains that he just wants to help the half demon become the best version of himself. “You are mankind’s best and only hope,” Trevor tells Hellboy.

“He’s really going through a late adolescence,” Harbour told Entertainment Weekly of what’s going on with his character internally at the beginning of the film. “It comes from this relationship with his father, who on the one hand claims to love him and on the other hand lies to him about certain things and wants him to be this weapon in this world. It’s the fundamental paradox: ‘How are you feeling today, my serial killer of your fellow beings?’ Like wait, you want me to be this brutal machine but then you care how I feel?”

Aside from Hellboy and Trevor, the trailer also gives fans their first look at the film’s main villain Nimue the Blood Queen (Milla Jovovich) as well as B.P.R.D. members Alice Monaghan (Sasha Lane) and Ben Daimio (Daniel Dae Kim). Since the video includes a quick look at the B.P.R.D headquarters, it is expected that more members of this supernatural hero team would show up in the actual movie.

While a lot of fans find the trailer pretty exciting, there are some who are actually disappointed with it. According to The Hollywood Reporter, Hellboy creator Mike Mignola and screenwriter Andrew Cosby previously said that the reboot would take a darker approach than the first two films of the franchise, and would lean more into the horror elements of the comic book, in which it is based. Apparently, the trailer suggests otherwise.

Based on the trailer alone, Nerdist reported that the upcoming Hellboy film has the same tone with Deadpool and Marvel’s Guardians of the Galaxy.