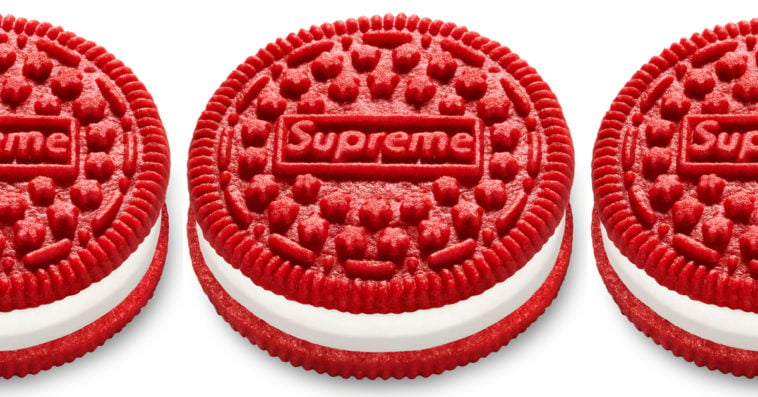 Streetwear brand Supreme has unveiled its upcoming spring-summer 2020 accessories collection on Monday, and the item that’s getting the most attention online is the Supreme-branded Oreos.

A three-pack of Supreme Oreos costs $8 — a price that is way more expensive than a 15.35-ounce pack of Double Stuf Oreos, which only retails for $3. But since Supreme is known for its notoriously pricey merchandise, people were not entirely surprised by the price tag of the brand’s very own version of Oreo. In fact, before knowing what its actual price is, some were joking that it would cost $250 or more per cookie.

“Who tf is buy over priced designer Oreos?” pic.twitter.com/f8HJtiV8Mk

A photo of a Supreme Oreo surfaced on Reddit six months ago, and because Supreme usually sticks with collaborations with fashion and lifestyle brands, many Redditors doubted its legitimacy at the time.

Any idea if there was ever any legitimacy to this photograph? OP said someone he knows works at a Nabisco plant I beleive? from r/Supreme

“This is wild if it’s real,” wrote one commenter. “Hype cookies, I never thought I’d see the day.”

Another Redditor posted, “Isn’t it weird there’s no packaging or anything? Like how the f–k would you get an Oreo without any kind of packaging?”

Fast forward to Monday, Twitter account Supreme Drops, which is not affiliated with the brand, shared a picture of what the packaging of Supreme Oreos would look like:

Who wants a Supreme Oreo pic.twitter.com/1EA5LNAdw1

While this partnership between Supreme and Oreo is definitely unusual, Zane Comer — executive creative director of Within, a branding company — believes the two brands have little to lose from the collaboration. “Hype has a formula,” he told AdAge. “For Supreme, it’s a low-risk way to generate earned impressions. If the collab doesn’t go viral, nobody knows about it. No harm, no foul. For Oreo, associating their product with a brand that has the cool-factor of Supreme also creates legitimate relevance out of thin air.”

In addition to Supreme Oreos, Supreme’s new accessories line also include Supreme-branded Mac Tools workstations, Numark portable turntables, Fujifilm Instax, Spalding basketballs, Ziploc bags, Speedo swimming goggles, and Hanes underwear. The entire collection is scheduled to drop at its New York stores on the Lower East Side of Manhattan and in Brooklyn on February 20th, and online the following week.