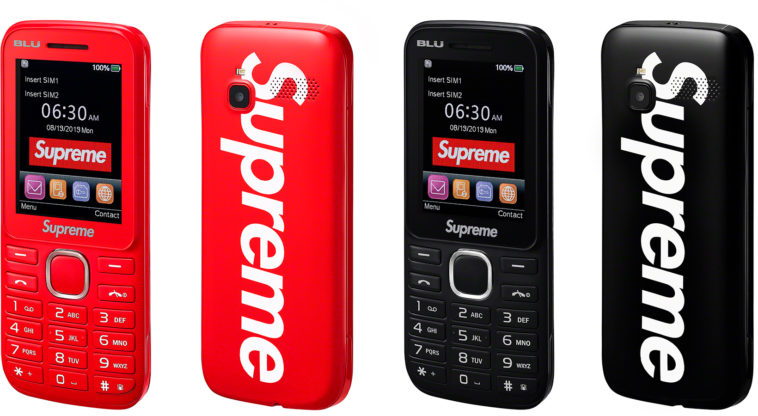 Supreme has just released its fall/winter 2019 catalog, and there are a few surprises for consumers. Among the many accessories that fans of the brand would come to expect, the retailer has unveiled a “burner phone” that is covered in the company’s signature branding. The phones, which are only 3G enabled, are manufactured by Blu.

According to Supreme, the phone will feature a built-in camera; but since this isn’t a smartphone, don’t expect one with much imaging chops. Supreme also hasn’t mentioned a price, although many are speculating that it could cost more then its specs would suggest. Much of this speculation is fueled by the company’s reputation for coming out with crazy expensive products; as one report highlights, the company once charged $30 for a limited edition brick.

The phone’s design has led many people to believe that this is a rebrand of the Zoey 2.4, a dumb phone which costs just $32.45 on Amazon and isn’t very highly rated. Should this be the case, then it will have a 2.4-inch phone screen along with 128MB of internal storage. Supreme is also including a 16GB memory card with the phone.

While the venture into phones may be surprising, this isn’t the first time Supreme has entered the tech world. For instance, the design firm once partnered with Mophie to create a line of Supreme-branded battery packs. Perhaps what was most notable about that partnership was that the battery packs ended up being more affordable than customers originally thought.

The unlocked Supreme-branded burner phone is set to be released in Los Angeles, Paris, New York, and London stores on August 22nd.