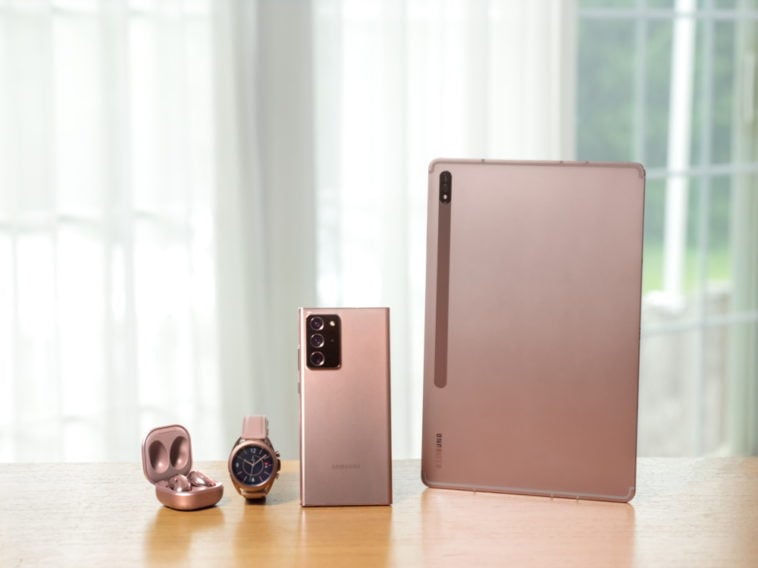 The Galaxy Note20 houses a 6.7-inch flat FHD+ Infinity-O display with a resolution of 2400×1080 while the Note20 Ultra is a slightly larger 6.9-inch Quad HD+ Dynamic AMOLED Infinity-O display with a resolution of 3088×1440. Samsung claims the phone uses the brightest phone screen in the world. Internally, both Notes are powered by the new Snapdragon 865+ with the Note20 having 12GB of RAM and up to 512GB of internal storage. The Note20, on the other hand, has 8GB of RAM with 128GB of internal storage.

They will come in a new series of Mystic colors that are made up of soft neutral notes finished with a haze effect that minimizes fingerprints and smudges. For its battery, the Note20 carries a 4,300mAh battery while the Note20 Ultra carries a slightly larger 4,500mAh battery. They’re equipped with Super Fast Charging capabilities that can power the phones to 50% in just 30 minutes.

Along with new iterations of the Note series, Samsung also introduces new features and improvements to some of the Note’s productivity tools. The S-Pen, which the Note series has long been known to carry, has been improved and given more “lifelike precision” in terms of accuracy and responsiveness. There are also five new Anywhere actions to make daily tasks like taking a screenshot or returning to the home screen a breeze.

Working in tandem with the S-Pen, the Samsung Notes app has also been redesigned for increased productivity. It now boasts of auto-save and syncing capabilities and can be shared across different platforms. This makes it easy to pick up where you left off when switching devices. In addition to that, you can also record audio while jotting down notes. The app is aware of both the audio you’re recording and your note-taking so simply tapping on a word will take you that specific part in the recording. The improved S-Pen also automatically smoothens out messy handwriting to make it more legible.

Furthering their current partnership, Samsung also worked with Windows to allow seamless access to different mobile apps via a Windows 10 PC. This integration will allow users to send messages, manage notifications, sync photos, and even mirror their phones easily on a PC. Later on this year, an update will also allow multiple mobile apps to run side by side on a PC. Samsung Notes can also automatically sync to Microsoft OneNote and Outlook while phone reminders will also synch to Outlook, To Do, and Teams.

Still working with Microsoft, Samsung is extending the gaming capabilities of the current Note20 series by allowing Xbox games to be played on the phone for users subscribed to an Xbox Game Pass Ultimate. This means titles like Minecraft Dungeons and Gears 5 can be accessed and played on a phone via the cloud. To provide an even better gaming experience, the Note20 series is loaded with an AI game booster, Bluetooth audio response optimization, and 240Hz touch latency. The latest being exclusive to the Note20 Ultra.

For imaging, both variants have a triple camera setup but with slightly different specs. The Note20 will have a 12MP Ultra-Wide camera, 64MP Telephoto with Space Zoom that allows up to 30x Super Resolution zoom and 3x Hybrid Optic zoom, and another 12MP Wide-angle camera with Super Speed Dual Pixel AF.

The more premium Note20 Ultra will also have a 12MP Ultra-Wide camera and 12MP Telephoto with Super Zoom with up to 50x Super-Resolution zoom. What’s different is a 108MP Wide-angle camera.

Both phones in the Note series are capable of up to 8K video recording and has optical image stabilization and Tracking AF on board. In addition to that, extra manual controls make for powerful content creation tools including the ability to adjust the settings of different audio sources. Both sport 10MP front-facing cameras for selfies.

Consumers can also opt to participate in Samsung’s trade-in program where they can get the Note20 for $9.73 per month or the Note20 Ultra for $18.07 per month.

The Galaxy Tab S7 houses an 11-inch 120Hz display with a 2560×1600 resolution. Its more premium sibling is a bit larger at 12.4-inches and an upgraded 120hz Super AMOLED display with a resolution of 2800×1752. As mentioned earlier, both devices carry octa-core processors supported by up to 8GB of RAM and up to 256GB of storage.

For cameras, both sport 13MP and 5MP ultra-wide rear cameras while around the front is an 8MP selfie camera. Audio is supplied by four AKG speakers with support for Dolby Atmos. As for battery, the Galaxy Tab S7 houses an 8000mAh capacity battery while the S7+ has a larger 10,090mAh battery. Both support 45W Super Fast Charging technology.

It’s unsurprising that, along with new smartphones and tablets, Samsung announces a new wearable. The Galaxy Watch3 helps users achieve their fitness goals and monitor their health with a slew of fitness-focused features wrapped in a slimmer design made with premium materials.

To help with fitness goals, the Galaxy Watch3 is equipped with next-generation fitness tracking and running coaching tools. It’s also able to monitor sleep with advanced sleep scoring and has heart rate monitoring, on-demand VO2 max, and SpO2 readings. For consumers in South Korea, the Galaxy Watch3 will have additional BP and ECG monitoring features. The Galaxy Watch3 also introduces a new Trip Detection feature that will send a custom SOS message to emergency contacts when the watch detects a fall.

As for smart functionality, the Galaxy Watch3 is able to send messages and emoticons and complete contactless transactions using Samsung Pay.

Last but not the least, Samsung introduces its newest true wireless earbuds, the Galaxy Buds Live. Co-engineered with AKG, it boasts of a bigger 12mm speaker in comparison to the Galaxy Buds+. Additionally, it also carries bass ducts which allow for deeper and richer sounds.

The new Galaxy Buds Live will be available starting August 6 and is priced at $169.99. Users can choose from Mystic Bronze, Mystic White, and Mystic Black.