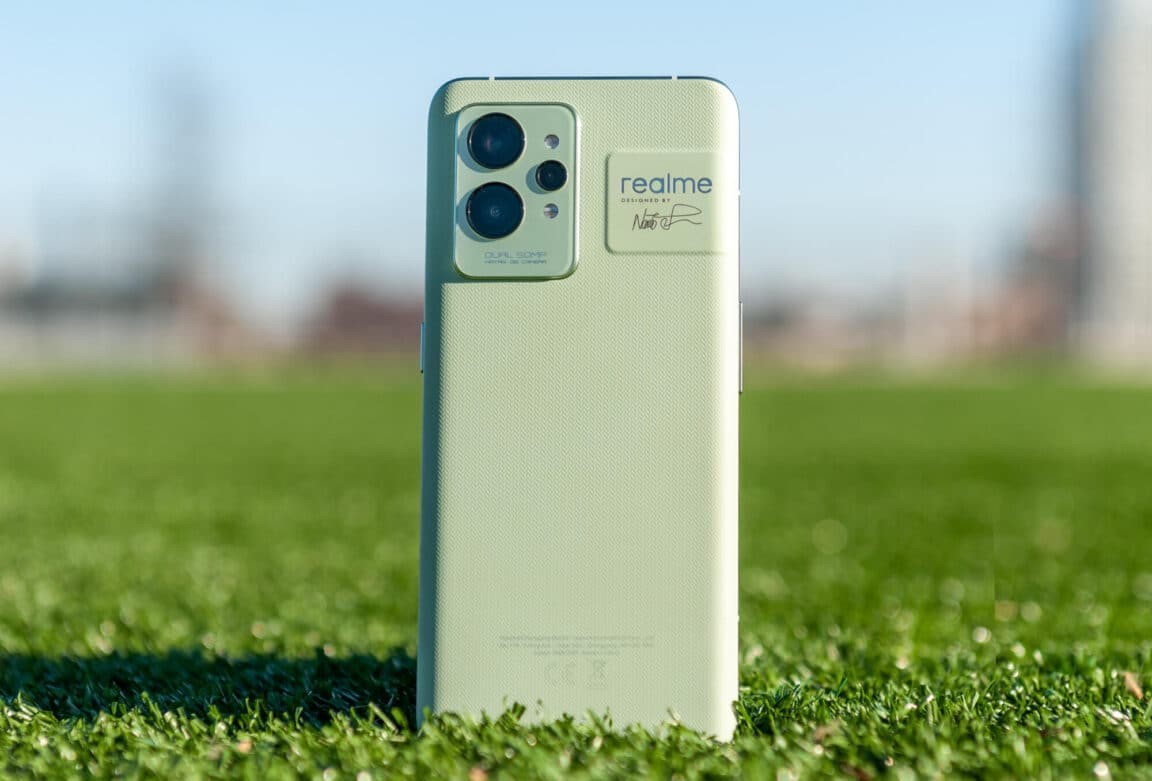 The world’s first environmentally conscious premium flagship phone also happens to be partially made from renewable sources and loaded with the latest flagship Qualcomm mobile processor along with an advanced cooling system to match. From ultra-wide to ultra-macro, the realme GT 2 Pro dares to be different. And we are all in. Read on for our in-depth realme GT 2 Pro review.

Table of Contents show
Design
Display
Performance
Connectivity
Camera
is the realme GT 2 Pro worth it? 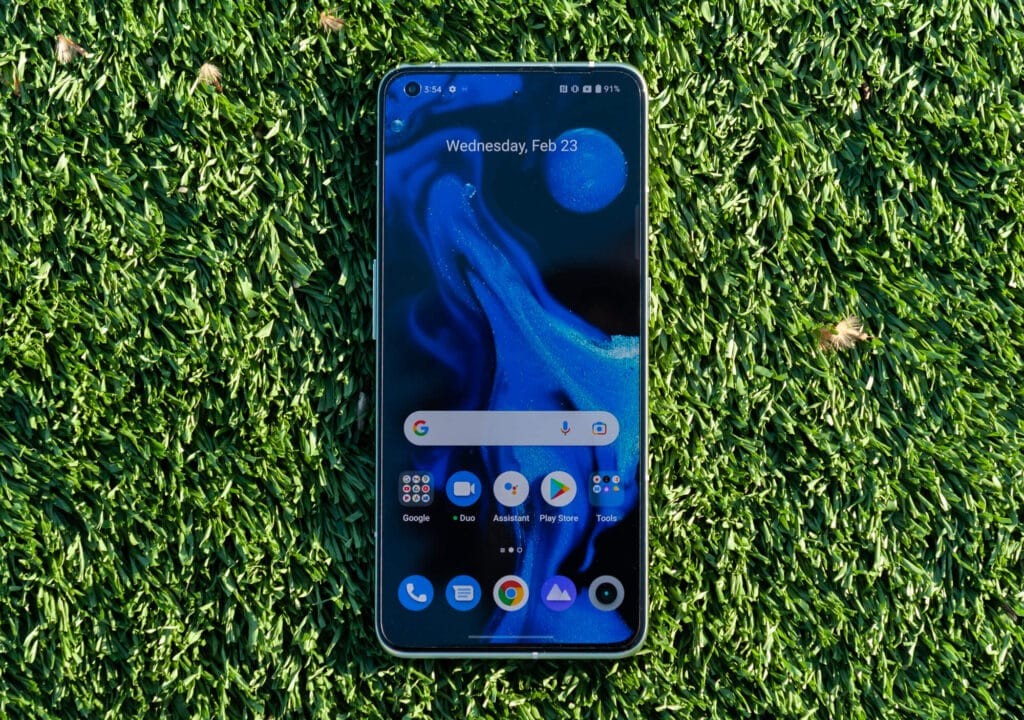 The first thing we noticed when we first unboxed the phone was the ultra-sleek design of the realme GT 2 Pro’s back cover. The triple camera module is enveloped in glass and lined with a beautiful chrome trim which contrasts nicely with the laser engraved textured matte back cover that is made from an eco-friendly bio-based polymer. We love that the back cover’s textured feeling of premium paper fiber makes it feel like a high-end phone. It is easy to grip and left zero fingerprints or smudges behind, all while sporting the mellow Paper Green color scheme. The realme GT 2 Pro is available in four colors that include Paper White, Paper Green, Steel Black and Titanium Blue.

Next to the camera module is a smooth raised area that features the realme logo and signature of award-winning industrial designer, Naoto Fukasawa, who collaborated with realme on the design of their new premium flagship phone. We appreciated that realme is listening to eco-conscious consumers and concerned with reducing its own carbon footprint by using an environmentally friendly biopolymer for the phone’s back cover which is partially made from recycled paper and creates 35% less carbon emissions to produce (applies only to Paper White and Paper Green versions). We genuinely hope that other phone brands will take note and follow suit.

Another thing to note is that there is no expandable SD card option as well as no headphone jack onboard. However, neither of these things are absolute deal breakers as the phone comes with plenty of storage space, and owning a pair of Bluetooth headphones/earbuds is the norm these days.

The realme GT 2 Pro’s 6.7-inch WQHD+ (3216 x 1440, 525 ppi) AMOLED 2K display is exquisite and has 10240 brightness levels, 10-bit color, 100% P3 color gamut and a 5,000,000:1 contrast ratio, making everything look gorgeous. Every swipe and tap felt extraordinarily smooth and ultra responsive on the flat display thanks to the phone’s 1-120hz adaptive refresh rate which optimizes performance and energy efficiency based on the task at hand. We were wowed by the beauty and breadth of contrast and stunning dynamic range from the darkest shadows to the brightest highlights when it came to viewing photos and videos on the super bright 1400 nits (peak) pixel packed display. Even in direct sunlight we found colors to be deep and vibrant while the viewing angles were exceptional as well.

The display’s 1000Hz turbocharged touch sampling made gaming on the realme GT 2 Pro a blast without any noticeable lag when playing Genshin Impact. With a fingerprint reader built directly into the display, we found unlocking the phone was ultra quick. The beautiful display has minimal bezels and is protected by Corning’s Gorilla Glass Victus which boasts twice the scratch resistance of Gorilla Glass 6 and protection from drops as high as 2 meters (6.5 feet). We opted out of testing that particular claim and decided to take their word for it.

We were quite impressed by the performance of the realme GT 2 Pro which is powered by the Snapdragon 8 Gen 1 and 12GB of RAM. Snapdragon’s new Armv9 architecture and 4mn technology boosts CPU performance to be 20% faster than its predecessor, while the integrated Adreno GPU impressively delivers up to 30% better GPU performance. Things can get heated with all that power in a compact device which is exactly what the phone’s massive nine layer stainless steel cooling surface is designed to prevent by dissipating heat away from the phone’s hotspots to help keep it running at peak performance.

On the software front, the realme GT 2 Pro comes packed with 256GB of storage and runs the realme UI 3.0 which is built on top of Android 12. Overall, we loved that everything felt like a smooth and solid stock Android experience no matter the task at hand which is great for users because nobody likes unnecessary bloatware.

When it comes to battery life we found that we were consistently able to get almost two days of normal use on a full charge thanks to the large 5,000MAH battery. We appreciated that realme included a 65W fast charger and USB-C cable in the box that made quick work of refilling the large battery.

Reception is something that we all depend on in our daily lives whether we are out and about shopping in the city or sitting at home ordering groceries from our phones and it’s a pain when everything screeches to a halt because of a lack of signal. We were super impressed by the antenna array matrix system on the realme GT 2 Pro as it uses ultra-wide band HyperSmart antenna switching to automatically choose between 12 different antennas that surround the phone for the one with the best signal strength. We noticed that we always had a fast and full signal across both 5G and Wi-Fi no matter how we held the phone, even with winter gloves on.

If you’ve ever used a mobile device for contactless payments you know that sometimes you have to position your phone in the exact correct position to get it to work which can be annoying when you’re in a rush. Fortunately, realme has appeared to have found a fix for that as we had zero issues using the phone when tapping at subway turnstiles or paying for store purchases thanks to the realme GT 2 Pro’s integrated 360° NFC technology. We found it very easy and convenient being able to use any part of the device for contactless payments and left us wishing that this was industry standard for all mobile phones.

The realme GT 2 Pro has a front-facing 32MP hole-punch camera located on the upper left of the display and it captured great looking selfies that were very flattering. On the backside is a triple rear-facing camera setup that includes a 50MP wide angle lens with phase detection auto-focus and optical image stabilization, a 150º ultra-wide 50MP fisheye lens, and a 2MP 40X macro lens for capturing microscopic level images. Our biggest gripe is the lack of an optical zoom which we’ve come to expect to be standard on most premium flagship phones these days.

The main 50MP camera has a wide angle lens that utilizes the new Sony IMX766 flagship sensor which was able to capture an impressive amount of detail and dynamic range in our photos. We were able to take shots that had a lovely balance of dark shadows, bright highlights and plenty of detail that left us with beautiful looking images that were full of color but didn’t suffer from oversaturation or being too contrasty. Using night mode resulted in equally stunning photos that were crisp, sharp and didn’t blow out highlights. Video quality was superfluid and smooth, especially when using movie mode As mentioned earlier, we were disappointed that our only option for zooming was digital as it just can’t compete on the same level with an optical zoom lens.

By far the camera we enjoyed most was hands down the 150º ultra-wide fisheye lens. We were a little hesitant about using the ultra-wide lens at first as we were worried it would end up looking overly dramatic but we loved how the lens captured cityscape scenes, especially those with massive skyscrapers and broad straight lines that curved beautifully into non-obnoxious fisheye compositions. Being able to capture giant structures like the Vessel at Hudson Yards in New York City was very easy as we didn’t need to step back too much in order to get everything in the frame which gave us an amazing night shot to admire. The realme GT 2 Pro’s image stabilization software and the ultra-wide fisheye lens make a great pair when it comes to low-light night photography.

While we had fun getting extreme close up photos from the macro lens using the 40X microscope mode, it took us a few tries to get things in focus at such a high magnification and it almost felt like overkill to be zoomed in so close. It uses the third camera lens along with two flash modules for even lighting which helped a lot for focusing. We were a bit let down by the fact that it only uses a 2MP sensor while most other flagship phones with macro lenses are using 5-10MP sensors. Unfortunately that means we won’t be able to make large canvas prints with the super close up shots we took.

is the realme GT 2 Pro worth it?

Featuring the screaming fast Snapdragon 8 Gen 1 along with a massive internal cooling system and an ultra-wide fisheye camera, the realme GT 2 Pro comes packed with really strong and premium hardware at a really attractive price around $897. Additionally, the phone’s back cover is made from an eco-friendly biopolymer that creates 35% less carbon emissions to produce, which can be very appealing to those eco-conscious consumers concerned about their impact on the environment. Competing with the realme GT 2 Pro is the Samsung Galaxy S22+ which has similar specs but rings up for nearly $1000.

Keep an eye out for the realme GT 2 that has many specs in common with its Pro counterpart, although it will have a 120Hz E4 AMOLED display and it will run on the older and less powerful Snapdragon 888. The GT 2 will also instead utilize an eight-layer cooling structure compared to the Pro’s nine but at a significantly lower price tag, around $670. The GT 2 looks like it will be a killer deal.