Follow us
Search
Menu
Pixel 6 Pro review
Bottom Line
Google has nearly knocked it out of the park with the Pixel 6 Pro, so much so, that the Pixel 6 Pro is giving OnePlus and Samsung some real competition this time around. The Pixel 6 Pro is our favorite Android flagship of 2021.
Pros
Excellent camera
Large vibrant display
Speedy performance
Unique design
Excellent call quality
Priced well
Improved video
Stock Android 12 with regular updates
Cons
Shorter than average battery life
No face unlock
Video quality still not as good as iPhone
4.6
Buy from Best BuyBuy from Amazon

Historically, Google’s Pixel series has been a trailblazer in the world of Android smartphones. The Pixel was amongst the first Android phones to offer a camera that could truly take DSLR-like photos. But as much as the Pixel 5 series offers solid values, they were also a bit of a disappointment because their photography chops offered only a marginal improvement over the previous generation of Pixels. Furthermore, the Pixel 5 didn’t offer many compelling flagship features. Fortunately, the Pixel 6 Pro changes all of that. To that effect, the Pixel 6 Pro is a true flagship phone that just might be the best Android flagship to buy in 2021. 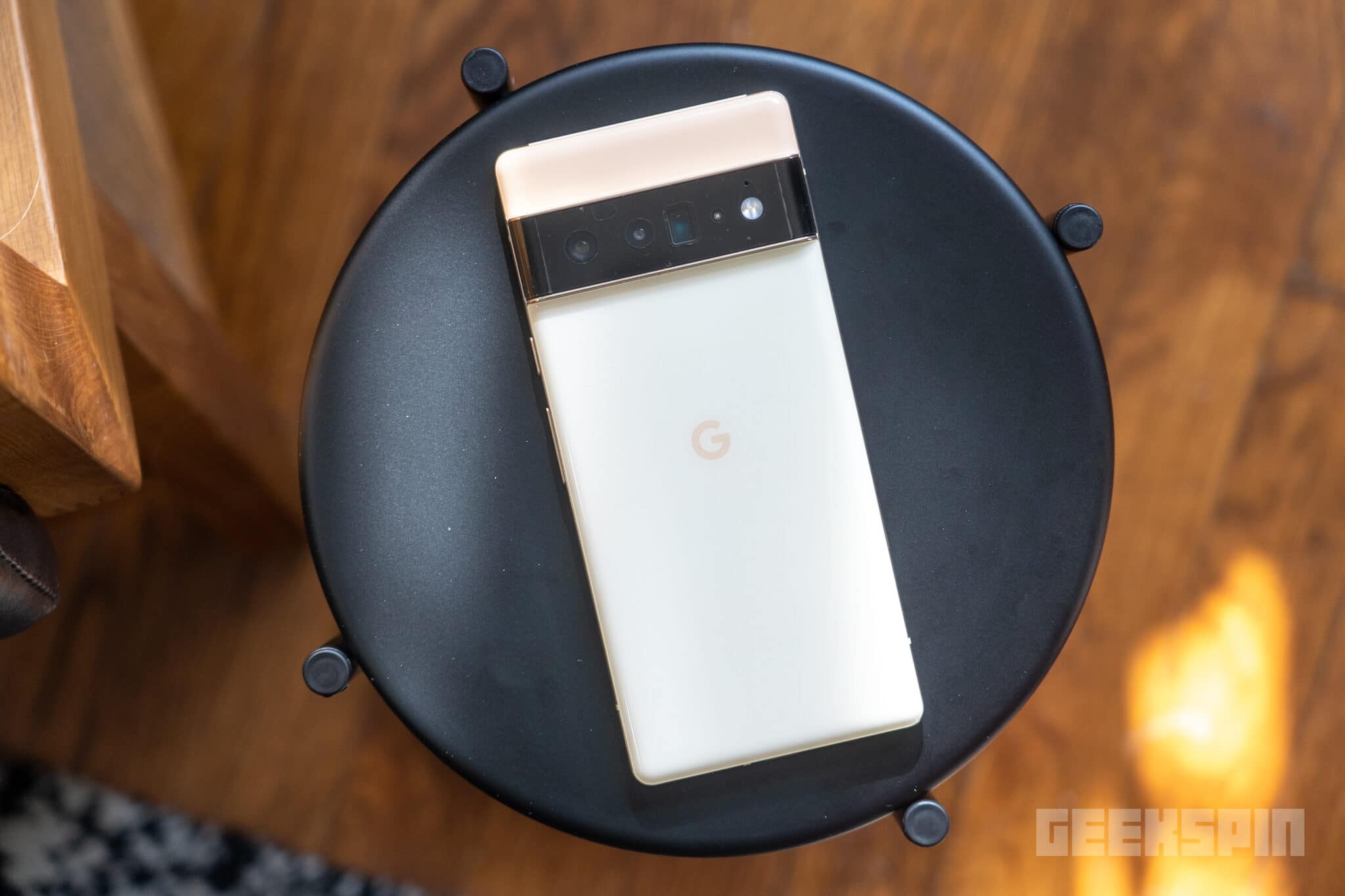 The design of the Pixel 6 pro is quite unique. While we wouldn’t call it a head-turner, we appreciate that its design is unusual yet still attractive. The three available choices – Stormy Black, Cloudy White, and Sorta Sunny are subtle yet charming. On the backside of the device, its glass back and camera bar can’t help remind us of a Cylon from Battlestar Galactica, but we appreciate how it makes the Pixel stand out in a sea of smartphones that mostly all look the same. That said, weighing in at 7.4 ounces, the Pixel is a bit hefty, but at the same time, it feels like a really solid and well-built device. 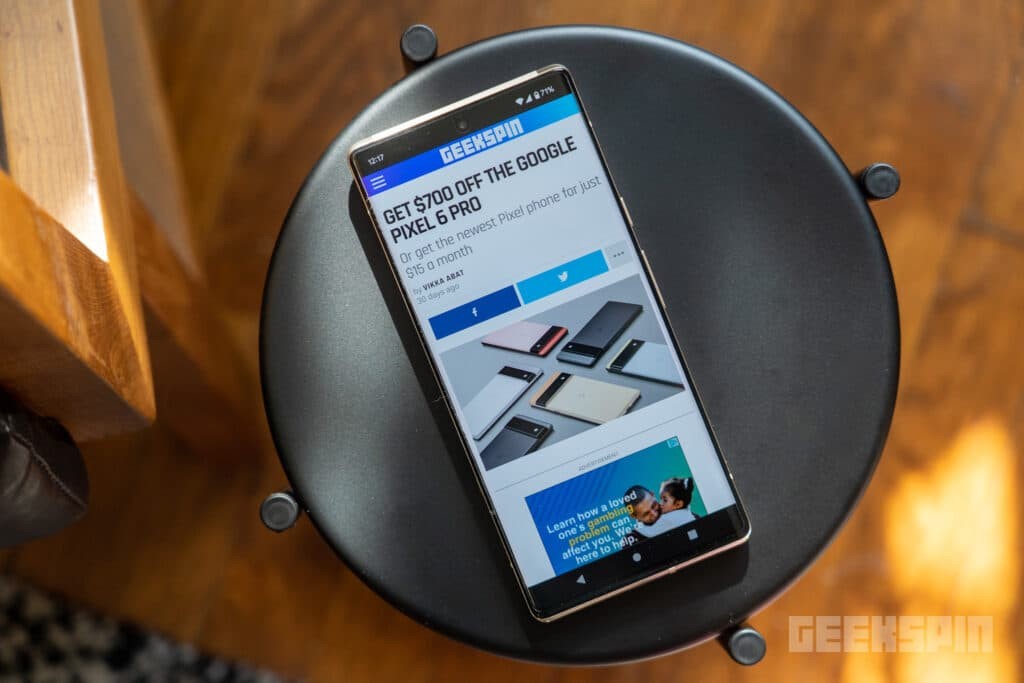 The 6.71-inch OLED (3120 x 1440) display on the Pixel 6 Pro is superb. The display is curved but it’s a subtle curve that we don’t find at all offensive or distracting. Its 19.5:9 aspect ratio makes the device a bit wide and large to hold in your hand, but it’s a pleasure to use for everything from gaming to watching movies. Those with smaller hands or pockets, will want to consider the 6.4-inch Pixel 6, however, the Pixel 6 lacks a 120Hz aspect ratio. In any case, our biggest gripe with the Pixel 6 Pro’s display is that it could be a bit brighter. For contrast, it offers a peak brightness of 842 versus the iPhone 13 Pro Max’s 1038 nits.

The 50MP main camera has been improved and now allows in 150% more light, while the 12MP ultrawide camera offers a 114-degree field of view, and the 48MP telephoto sports a 4x optical zoom and up to 20x digital zoom. The camera offers a new feature called Magic Eraser that allows you to quickly and very easily remove unwanted objects from the background of your photos – and the feature works quite well.

We’re going to compare the Pixel’s camera to arguably its biggest direct competition – the iPhone 13 Pro Max. Overall, both phones offer phenomenal photos that are mostly on par with one another. But we observed that the Pixel offers significantly better night photography – it’s able to pick up objects in the dark and brighten them up really well. On the flip side, we prefer the iPhone’s selfies – people appear brighter on selfies taken with the iPhone, and more flattering due to better smoothing, but the Pixel offers more natural colors for its selfies. When it comes to zoom, the Pixel is able to take some impressive shots. It used to be that zoomed-in photos on a smartphone were a joke, but the Pixel is able to snap some really clean and detailed zoomed-in photos.

The Pixel 6 Pro is powered by Google Silicon’s first-generation chip, Tensor, and performance does not disappoint. When it comes to benchmark tests, the Pixel doesn’t quite outperform the iPhone 13 Pro Max but it’s able to go toe-to-toe with the Snapdragon 888 inside the likes of the Galaxy S21 Ultra.

Oddly enough, despite packing in a large 5,000 mAh battery, the Pixel 6 Pro doesn’t have the greatest battery life. Some previous Pixel models have also struggled with battery life, so this isn’t all that surprising, but we’re hoping that a future software update will improve battery life. In any case, you’ll be able to get a full day of use with the Pixel with a little bit of life to spare at the end of the day. 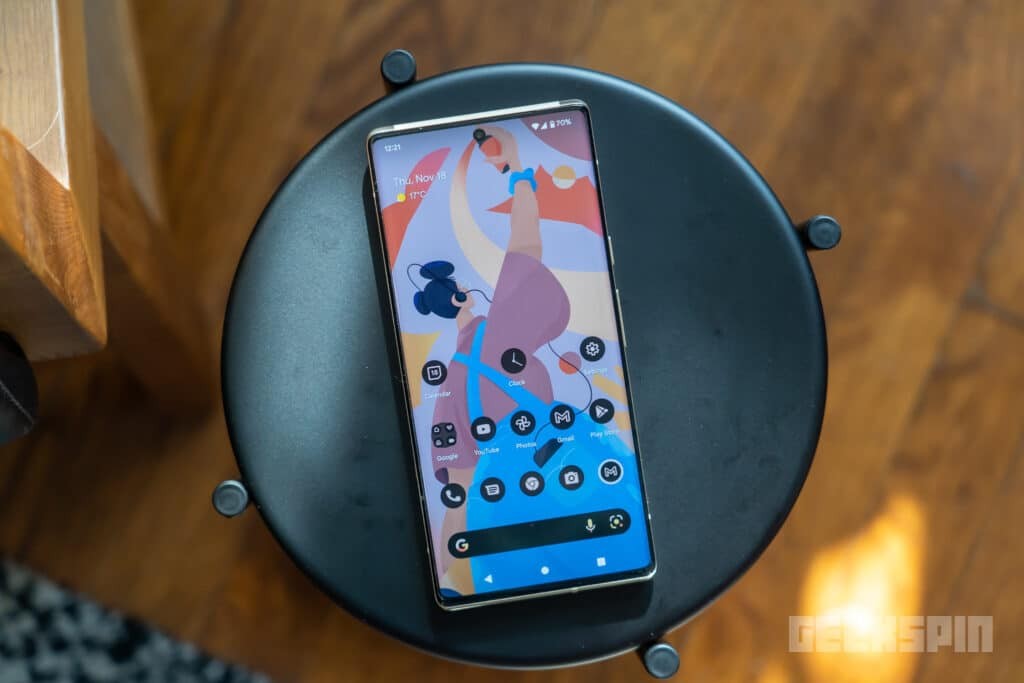 Despite some minor shortcomings, we’re smitten with the Pixel 6 Pro. And we’re especially smitten with its price tag. Priced at $899, the Pixel 6 Pro is a great value considering what a top-notch flagship it is. It seems to us like Google has taken a rule out of OnePlus’ old playbook with this reasonable flagship pricing and buyers should certainly appreciate that. Overall, Google has nearly knocked it out of the park with the Pixel 6 Pro, so much so, that Pixel is giving OnePlus and Samsung some real competition this time around.

The Pixel 6 Pro was gifted to us by Google. All thoughts and opinions are 100% our own