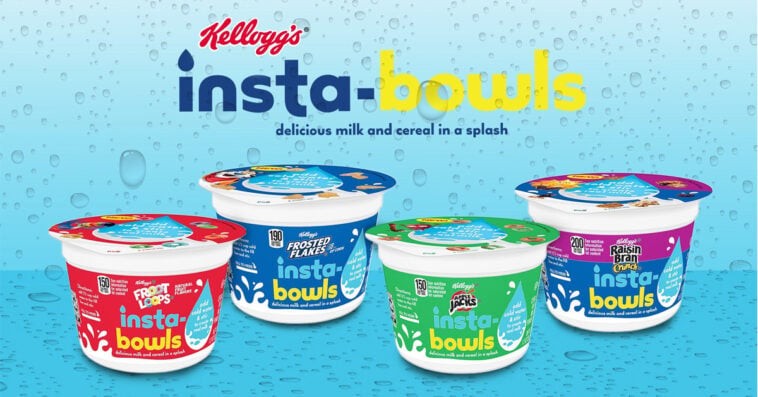 While cereals can be eaten dry, a lot of people prefer to consume them with milk. That, however, can be hard for busy people who prefer breakfast foods that are easy to eat on the go. A solution to this problem is the new Kellogg’s Instabowls, a new line of cereal that contains milk powder and only requires cold water to enjoy cereal with milk in an instant.

Kellogg’s Instabowls are pre-portioned, single-serve, mess-free tubs of cereal that are perfect for on the go. Just add cold water to the fill line and the milk powder inside the bowl turns into real milk with a quick stir.

“In recent years, there has been a huge trend toward portability for food, especially as busy schedules and life’s everyday curve balls prevent traditional sit-down meals,” said Chris Stolsky, Marketing Director at Kellogg Company, in a press release. “We created Kellogg’s Instabowls as an easy solution for the ‘anytime cereal break’ so you can now bring your favorite Kellogg’s cereals with you wherever life takes you and not have to worry about milk, dishes, or clean-up.”

“[This is the] first time that we’re able to give consumers the opportunity to have a milk and cereal experience without having milk readily available,” Stolsky added of Kellogg’s cereal innovation in an interview with CNN Business. “This can go with you wherever.”

The making of Kellogg’s Instabowls

Stolsky told CNN Business that Kellogg’s Instabowls were over two years in the making, pointing out that the company had been looking for a way to create milk-and-cereal bowls since they found out that consumers were interested in to-go products even before the pandemic. But it took Kellogg’s some time to figure out a way to turn the milk powder into liquid form quickly.

Stolsky explained that some powdered milk require a lot of stirring, or even shaking, to look like liquid milk, and that can’t be done with cereal because the longer it takes to fully rehydrate the milk, the soggier the cereal becomes. Kellogg’s Instabowls only became a reality when the company discovered a way to rehydrate the milk power swiftly and easily.

“[Instabowls use] a proprietary process that essentially evaporates the water off but leaves the milk components there,” Stolsky shared. “So when you add the water back, it’s the same great taste, same great nutrition that you get with a regular amount of milk.”

Where to buy Kellogg’s Instabowls

Now available at select Walmart stores nationwide and on Walmart.com, Kellogg’s Instabowls will eventually roll out at additional retailers across the country.

“We are really doing a test market with Walmart,” Stolsky told CNN Business, noting that the limited test will help the company “better understand” how to introduce the new product to consumers “It’s very strange, right? That you’re going to add water to it. We want them to be able to understand [that] the magic is in the bowl.”

How much are Kellogg’s Instabowls? These mini tubs of cereal contains milk powder which turns into real milk when added with cold water.

Danielle Wiener-Bronner of CNN Business tried the Raisin Bran Crunch bowl and she wrote that “the rehydrated milk tasted a little strange” but that’s probably because she usually eats cereal with almond milk.

Wiener-Bronner’s husband tried the Froot Loops bowl. “[He] said he wouldn’t have known the milk was rehydrated. To him, it just tasted like sweet cereal milk,” she wrote of what his husband thought of Kellogg’s Instabowls.

Kellogg’s also conducted a proprietary study about Instabowls in 2021, and according to an initial fan reaction, they love this offering because they found it easier “to grab a bottle of water or find water than make sure that I have milk. Easy to store. Easy to travel with – and kids love it.”