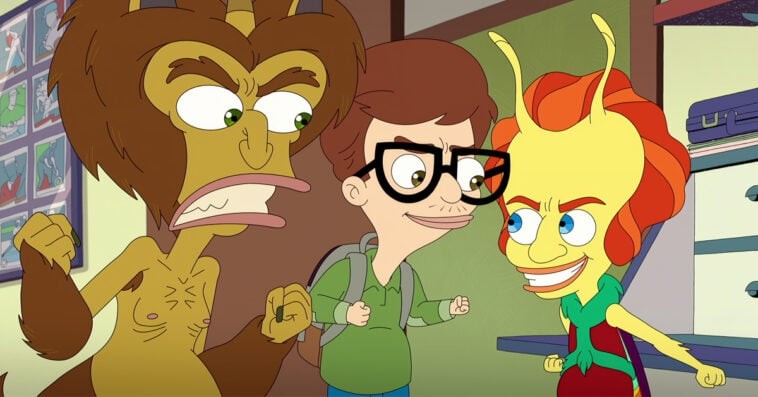 The full list of new content coming to Netflix next month has been unveiled and the extensive list of titles confirms the highly anticipated return of two of the streamer’s fan-favorite original series.

Described as the real Crazy Rich Asians, reality TV series Bling Empire is returning to Netflix for its third season on October 5th. In the new batch of episodes, unfinished business and big opportunities stir up tension in the group, but nothing will stop them from living their flashiest and most fabulous lives.

The critically acclaimed and Emmy-winning adult animated comedy Big Mouth is also coming back to the streaming service for its sixth season. In the new installment, the puberty-centric show focuses on the theme of family as the beloved characters continue each of their journeys, discovering that while you can’t always pick your family, you can surround yourself with those that love you for who you are.

While there’s only a few popular returning series for the month of October, Netflix is launching a string of new original series next month to make sure that its subscribers won’t run out of something new to watch.

Among these is the horror mystery-thriller series called The Midnight Club. Premiering on October 7th, the show is set inside a hospice for terminally ill teens, where members of the titular exclusive club make a chilling pact: The first to die must send a sign from beyond the grave.

Netflix is also introducing a reimagined version of the Belgian competition series The Mole. Debuting on October 7th, the American take on the program will follow 12 players as they work together in challenges to add money to a pot that only one of them will win at the end. Among the players is one person who has secretly been designated the “Mole and tasked with sabotaging the group’s money-making efforts. In the end, one player will outlast their competition and expose the Mole to win the prize pot.

For drama fans, the Zoe Saldaña-led series From Scratch will be available to stream on Netflix starting October 21st. Based on Tembi Locke’s memoir of the same name, the limited series tells the story of an artist who finds romance with a chef in Italy and embarks on a life-changing journey of love, loss, resilience, and hope across cultures and continents.

Just in time for Halloween, Netflix is adding Guillermo Del Toro’s Cabinet of Curiosities to its library on October 22nd. The horror anthology series features eight unique horror stories that challenge the classical horror genre. Two of the episodes are original works by del Toro himself, while the others are written and directed by various filmmakers.

To delight fans of the teen fantasy genre, Netflix is dropping the British series The Bastard Son & The Devil Himself on October 28th. Based on the Half Bad books by Sally Green, the bloody and breathtaking fantasy series stars Jay Lycurgo (Titans) and Nadia Parkes (Doctor Who).

Another British series coming to Netflix in October is Inside Man. Starring David Tennant and Stanley Tucci, the show, which doesn’t have an exact release date yet, follows an American death row prisoner who helps a young British journalist search for a friend who’s suddenly disappeared.

Completing the “New on Netflix in October” list is a number of original films. This includes the horror movie Mr. Harrigan’s Phone based on the novella of the same name by Stephen King. Set to debut on October 5th, it follows a boy and an aging billionaire who bond over books and their first iPhones. But when the older man passes, their mysterious connection refuses to die.

After its September theatrical release, the mystery thriller film Luckiest Girl Alive will make its streaming debut on Netflix. Based on Jessica Knoll’s novel of the same name, the movie stars Mila Kunis as Ani Fanelli, a writer whose life in New York City starts to unravel when a true-crime documentary forces her to confront her harrowing high school history.

Family movies The Curse of Bridge Hollow and The School for Good and Evil are also heading to Netflix on October 14th and October 19th.

The Curse of Bridge Hollow follows a father (Marlon Wayans) and his teenage daughter (Priah Ferguson) who are forced to team up and save their town after an ancient and mischievous spirit causes Halloween decorations to come to life and wreak havoc.

The School for Good and Evil, meanwhile, tells the story of best friends Sophie and Agatha who find their bond put to the test when they’ve whisked away to a magical school for future fairy-tale heroes and villains.

In the movie, Amy (Chastain), a compassionate nurse and single mother struggling with a life-threatening heart condition, is stretched to her physical and emotional limits by the hard and demanding night shifts at the ICU. But help arrives, when Charlie (Redmayne), a thoughtful and empathetic fellow nurse, starts at her unit. While sharing long nights at the hospital, the two develop a strong and devoted friendship, and for the first time in years, Amy truly has faith in her and her young daughters’ future. But after a series of mysterious patient deaths sets off an investigation that points to Charlie as the prime suspect, Amy is forced to risk her life and the safety of her children to uncover the truth.

Want to find out more shows, films, and specials coming to Netflix next month? Watch the “What’s new on Netflix in October 2022” video below: