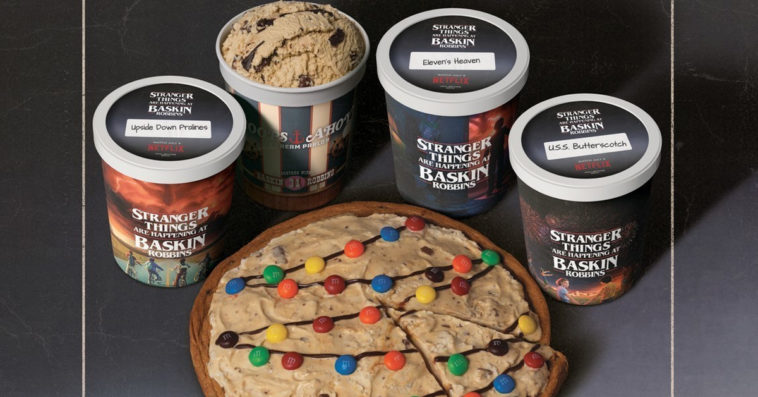 Baskin-Robbins has a very special treat for Stranger Things fans.

The ice cream chain announced earlier this week that it is teaming up with Netflix for a selection of limited-edition desserts inspired by the popular sci-fi horror series.

Baskin-Robbins will then introduce five more Stranger Things-themed desserts to its menu in July. These cold sweet treats are the following:

Upside Down Sundae: a sundae featuring the Upside Down Pralines Flavor of the Month that’s built upside down with the toppings on the bottom

Demogorgon Sundae: a waffle bowl sundae that looks like a Demogorgon monster

“We wanted to give fans a taste of the new season of Stranger Things and are thrilled to partner with Netflix to give customers across the country an experience straight out of Hawkins, Indiana,” said Carol Austin, vice president of marketing for Baskin-Robbins, in a statement. “Whether you love the show or just love some seriously delicious ice cream creations, we’ve got something for everyone.”

READ  Timeless is still cancelled, but it's getting a finale movie to wrap up the series
ADVERTISEMENT
ADVERTISEMENT

As part of the campaign to promote Stranger Things Season 3, Baskin-Robbins and Netflix are also bringing the show’s Scoops Ahoy Ice Cream Shop to life with an ice cream truck that will be serving up scoops of ice cream to fans on the West Coast in June.

Stranger Things Season 3 will drop on Netflix this July 4th.