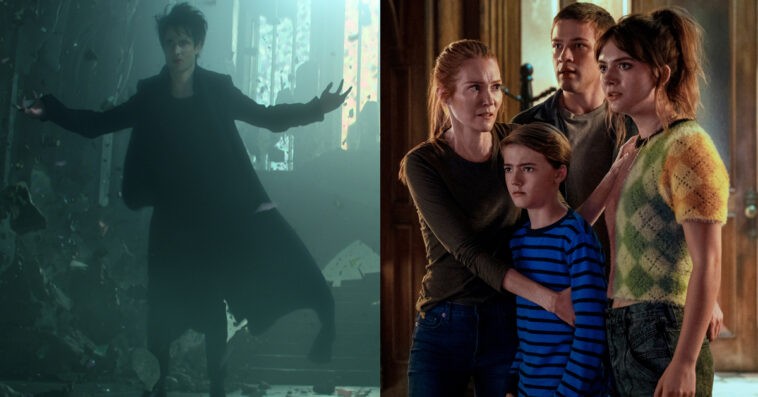 The full Netflix August 2022 content lineup has been released and it confirms the impending arrival of some of the highly anticipated series and movies on the streaming service next month.

The Sandman, a live-action adaptatlion of Neil Gaiman and Sam Keith’s comic book series of the same name, is set to premiere on Netflix on August 5th. The series follows Morpheus (Tom Sturridge), aka the King of Dreams, as he embarks on a journey across worlds to find what was stolen from him and restore his power, after being held captive for 105 years.

The documentary series Clusterf**k: Woodstock ’99 will also be available to stream on Netflix next month. Dropping on August 3rd, the docuseries explores what horribly went wrong in the 1999 revival of the original Woodstock music festival of 1969.

For those who love feel-good content, Netflix will be releasing Instant Dream Home on August 10th. In this new reality TV series, a team of rapid-fire renovators takes big risks and makes painstaking plans to transform families’ homes from top to bottom in just 12 hours.

Asian horror stories hit different, so Netflix is bringing some of the most unspeakable horror stories that roam the halls of Thailand high schools in School Tales The Series, also premiering on August 10th.

The Netflix August 2022 lineup also includes returning fan-favorite series, including Locke & Key. The third and the final season of the fantasy horror series, which is set to debut on August 10th, finds the Locke family uncovering more magic as they face a demonic new foe who’s dead-set on possessing the keys.

The coming-of-age dramedy Never Have I Ever is also returning to Netflix next month. Dropping on August 12th, season 3 of the show finds Devi (Maitreyi Ramakrishnan) and her friends learning that romantic relationships come with a lot of self-discovery and drama.

August also marks the return of two of Netflix’s popular animated series. DOTA: Dragon’s Blood is set to come back on the platform for its book 3 on August 11th, while season 3 of He-Man and the Masters of the Universe is scheduled to premiere on August 18th.

Riverdale star Lili Reinhart, meanwhile, headlines the romantic dramedy movie, Look Both Ways, which is set to debut on Netflix on August 17th. In the Wanuri Kahiu-directed flick, Natalie’s (Reinhart) life diverges into parallel realities on the eve of her college graduation: one in which she becomes pregnant and remains in her hometown to raise her child, and another in which she moves to LA to pursue her dream career.

Another star-studded Netflix original film debuting next month is Me Time. The rated-R comedy from filmmaker John Hamburg centers on a stay-at-home dad who finds himself with some “me time” for the first time in years. While his wife and kids are away, he reconnects with his former best friend for a wild weekend that nearly upends his life. The movie stars Mark Wahlberg, Kevin Hart, Regina Hall, and more.

The South Korean film Carter tells the story of a man who wakes up missing his memories. Directed by a mysterious voice from a device in his ear, he sets off on a hostage rescue mission rife with danger.

Fullmetal Alchemist The Revenge of Scar, meanwhile, is a sequel to the first live-action Fullmetal Alchemist movie and finds the Elric brothers meeting their toughest opponent yet — a lone serial killer with a large scar on his forehead.

Non-original content arriving on the streamer on the first day of August includes Love & Basketball, Miss Congeniality, Hardcore Henry, The Age of Adaline, the Spider-Man trilogy, Ferris Bueller’s Day Off, and Pawn Stars season 13, among many others. The James Bond film Skyfall, meanwhile, arrives on the streamer on August 5th.

Find out more series, films, and specials included in the Netflix August 2022 lineup in the video below: