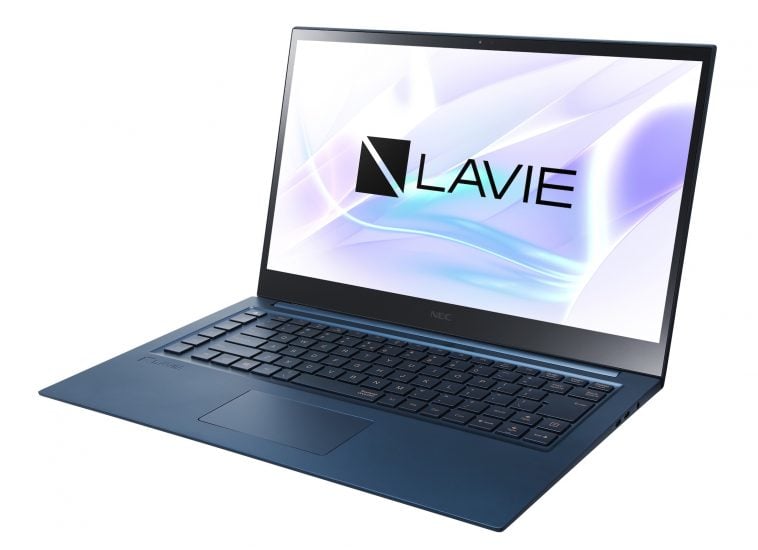 Lenovo is bringing three NEC LAVIE PCs to the U.S. To start, they’re bringing over the LAVIE Pro Mobile, the LAVIE Home All-in-one, and the LAVIE Vega.

Starting with the lightest of the bunch, the LAVIE Pro Mobile weighs in at just 1.85lbs and offers a thickness of only 15.5mm. It also has a lift-up hinge keyboard for improved ergonomics and a fingerprint sensor on the power button for easy, one-touch, log in.

The LAVIE Pro Mobile’s top cover is made of Toray’s highly durable racing car grade carbon while the bottom is made of magnesium-lithium array which contributes to its lightweight design. The latter was initially exclusively used in the aerospace industry and was later pioneered by NEC PC for commercial use in 2012.

The LAVIE Pro Mobile’s minimalist design, by no means, sacrifices its power and functionality. This 13.3-inch laptop is powered by an Intel Core i7 processor with 8GB of DDR3 RAM. It also houses a 512GB SSD and has an integrated INTEL UHD 620 graphics card. Its display is an FHD display, and it touts a battery life of 15 hours.

This PC houses a 27-inch FHD floating display with narrow bezels and is the world’s first PC to offer Crystal Sound Display tuned by Yamaha. Developed by LG Display, the LAVIE Home’s Crystal Sound Display “vibrates” the display to produce sound. The speakers are embedded within the display meaning the device itself has no visible speakers which adds to its aesthetic appeal.

The LAVIE Home is also equipped with far-field microphones with support for Alexa and Cortana. What is especially neat is that the LAVIE Home can easily be operated via voice commands even when the PC is off because of Intel’s Wake-on-Voice function.

To top off the series of NEC’s new releases is the LAVIE Vega. This 15.6-inch, 4K OLED display laptop is designed with creators in mind.

The LAVIE Vega has a Gorilla Glass 6 back cover which gives the device an attractive reflective deep blue finish. But form doesn’t compromise function as this glass back carries a feature called Smart Light – inside the LAVIE logo on the back is an LED that doubles as a smart speaker that supports Microsoft’s Cortana with Modern Standby. This, combined with the LAVIE Vega’s four far-field microphones, will allow Cortana to react to voice commands even if the laptop is closed or on sleep mode. Additionally, it also has a powerful Yamaha sound system built-in.