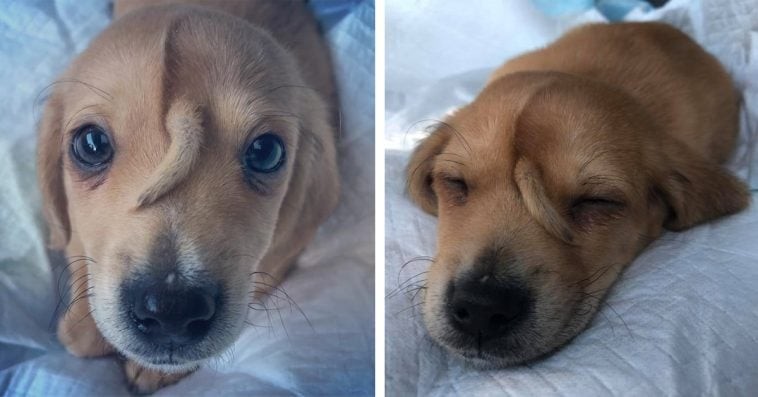 A 10-month old puppy with an extra tail on his on its forehead has become an Internet star since he was rescued earlier this week by Missouri-based nonprofit rescue Mac’s Mission.

The puppy — which was quickly given the name Narwhal, after the species of whale with a single, large tusk resembling a unicorn’s horn — was found by Mac’s Mission wandering about in the freezing cold with an older dog in Jackson last weekend.

“It’s snowed the last couple of days, so I’m nervous,” Mac’s Mission founder Rochelle Steffen told The Washington Post of her initial reaction when she was informed about an abandoned puppy on the street. “But Narwhal and an older dog whom they suspect may be his father are now safe.”

Narwhal was given medicine for worms, and the frostbite on two of his toes was also treated.

According to Steffen, Narwhal appears to be a dachshund-mix with a wiener dog’s short legs. He also has a tan coloring, soft fur, and a head that looks like those of golden retrievers.

Since rescuing Narwhal, Mac’s Mission has been posting videos and photos of the pup on Facebook to give their supporters an update on his condition. Most of those posts have been liked and shared thousands of times, making Narwhal a true viral sensation.

To find out if Narwhal’s face tail is something they should be worried about, Steffen took him to Cape Small Animal Clinic, where he was examined by Dr. Brian Heuring. A veterinarian for 16 years, Dr. Heuring said that he’s never seen a puppy like Narwhal, but he’s confident that the oddity won’t affect the dog’s quality of life. Because Narwhal’s face tail doesn’t have any bones and is not connected to his skull, Heuring said that there’s no medical reason to have the tail removed.

“Just because he’s different doesn’t mean we have to remove the difference,” Steffen told USA Today. “You need to embrace that fact that he’s special. He was made this way for a reason. We don’t know what the reason is, but he’s amazing just the way he is.”

While Heuring’s not sure what may have caused the face tail, the Washington Post reported that it could be a case of canine fetal absorption, in which a puppy dissolves in the womb. According to studies, this occurs for 10 to 15 percent of fetuses, with the mother or sometimes a sibling taking in parts of the fetal remains.

Just another video of our narwhal the magical fuzzy unicorn puppy because we think he is amazing. (We are not accepting applications for him right now until we are very certain his unicorn horn is not going to have a growth spurt and become an issue) (no it does not wag) (yes he is keeping it) (yes he is amazingly awesome!!) Love,MacKeeperOfTheUnicorns

Posted by Mac the pitbull on Wednesday, 13 November 2019

Though Mac’s Mission has been receiving lots of applications from people who would love to adopt Narwhal, Steffen said that the rescue plans to take care of Narwhal in the meantime to make sure that his face tail doesn’t obstruct his vision in the future.